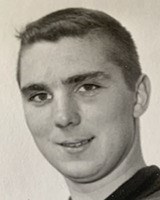 BORN
1937
DIED
2021
FUNERAL HOME
Norberg Memorial Home Inc
701 E Thompson St
Princeton, IL
Lewis 'Lew' Flinn
Born: January 11, 1937
Died: May 5, 2021
PRINCETON - Lewis "Lew" Flinn was born on January 11, 1937, in Princeton, Illinois to Lucille (Sledgister) and Lewis Flinn Sr. Lew passed away on May 5, 2021. He was preceded in death by his parents and sister Gloria (Stanley) Clary.
He is survived by his wife of 62 years Doreen (Conant) Flinn of Princeton, his son Jeff (Michelle) Flinn of Prescott, Arizona, his daughter Karen (Dave) Abele of Sterling, Illinois, five grandchildren: Rachel, Michael, Kathleen, Nicholas, and Jonathan and two great grandchildren: Eliza and Cary Jo.
Lew earned 10 varsity letters in football, basketball, and track at Princeton High School. His illustrious career included the following highlight reel: IHSA pole vault state champion for the 1954-55 season; starting guard on Princeton's legendary 1954-1955 IHSA fourth place basketball team; and starting quarterback for the Tigers. While Lew won many all-state and all-conference honors, his greatest high school accomplishment was winning over his high school sweetheart, Doreen, who remained his lifelong cheerleader.
He graduated from Princeton High School in 1955. He started his college career at Kansas State University but soon transferred to Northern Illinois University where he became NIU's first full scholarship grant-in-aid student-athlete.
Lew was a three-sport athlete at NIU, with nine NIU varsity letters but found his greatest collegiate success on the gridiron. Lew excelled as NIU's starting quarterback where he led the team in passing (1957-59), total offense (1957-59), and kick-scoring (1958-59). He was ranked 5th nationally in NAIA passing and 9th in NCAA college division in his last year of college. In 1984, Lew was inducted into the NIU Hall of Fame.
On August 9, 1958, Lew and Doreen were marred at St. Matthew's Lutheran Church in Princeton. Both would go on to graduate from Northern Illinois University. In addition, Lew earned a master's degree from Bradley University in Peoria, Illinois.
Lew began his career as a coach and teacher at Marquette High School in Ottawa, Illinois and then became the head track coach and assistant football coach at Barrington High School in Barrington, Illinois. From 1969 through 1974, he was employed as the head football coach and assistant track coach at Princeton High School. In the 1980s, he owned and managed Elm City Trailer Sales. He also worked as the sales manager for Spartan Tools in Mendota, Illinois in the 1990s.
In 1995, Lew was inducted into the Bureau County Sports Hall of Fame as a member of the 1955 Princeton High School Basketball Team and again in 2002 as an individual athlete.
Lew loved coaching, snowmobiling, traveling, rooting for the Chicago Bears, and watching NASCAR racing. He enjoyed spending time with his family and friends at his home on Lover's Lane in Princeton. He was a proud member of the Lover's Lane Turkey Buzzards, a social group of neighbors who shared a passion for gardening, ATVs, motorcycles, and home brews.
After his retirement, Lew continued to coach several successful local pole vaulters, including Alyssa Donner, IHSA 2009 1A State Pole Vault Champion.
Lew and Doreen moved to Arizona in 2014, but found that even sunny winters could not keep them from spending their golden years in the only place that would ever truly be home. In 2017, they happily returned to Princeton, Illinois.
For the past seven years, Lew's well-nourished rescue dog, Zebu has been his constant companion and loyal friend.
A celebration of life will be held at Norberg Memorial Home, Inc. & Monuments, Saturday, July 24, 2021 1:00 p.m. to 2:30 p.m., followed by funeral services at 2:30 p.m., officiated by Reverend Michael Jones.
In lieu of flowers, memorials may be directed to Princeton High School or Feed America.
Online memorials and condolences may be left at www.norbergfh.com
Arrangements by Norberg Memorial Home, Inc. and Monuments.
To plant trees in memory, please visit our Sympathy Store.
Published by Bureau County Republican from Jul. 15 to Jul. 17, 2021.
MEMORIAL EVENTS
No memorial events are currently scheduled.
To offer your sympathy during this difficult time, you can now have memorial trees planted in a National Forest in memory of your loved one.
Funeral services provided by:
Norberg Memorial Home Inc
MAKE A DONATION
MEMORIES & CONDOLENCES
Sponsored by Norberg Memorial Home Inc.
0 Entries
Be the first to post a memory or condolences.