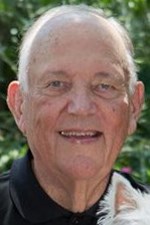 Quentin C. Lorenz, 89 years of age, of Beatrice, passed away at the Beatrice Community Hospital Saturday afternoon, November 14, 2020. He was born on December 22, 1930, in Johnson to August and Ottilie (Deubler) Lorenz and was a graduate of Johnson High School. Quentin served his country in the United States Air Force during the Korean Conflict from April 3, 1951, until honorably discharged on January 14, 1955. He then received a bachelor's degree at the University of Nebraska in Lincoln and was a member of the Delta Sigma Pi business fraternity. Quentin and Doris "Penny" Pennington were married on November 14, 1959. He was employed by Cessna Aircraft Company and retired in 1986 as an International Marketing Manager. They moved to Beatrice from Hutchinson, KS in 1992. Throughout his life, Quentin was an active member of the Zion Lutheran Church in Johnson, where he played the organ as a young man and served on the council. He was a former member and board member of the Prairie Dunes Country Club, as well as sitting on the board of directors for the Burton State Bank, was a member of the American Legion, and was a past member of the Beatrice VFW Club. He enjoyed airplanes and had a private pilot's license as a young man, his first passenger being his loving wife Penny. Quentin was an avid golfer, having an intense love for playing and for the game itself. He also enjoyed tennis, traveling, yard work, cooking and grilling, and creating small steam engines. He especially enjoyed fine scotch, spending time in Scotland, traveling all over the world to visit family, and the endeavors of his grandchildren.

To plant trees in memory, please visit our Sympathy Store.
Published by Beatrice Daily Sun on Nov. 17, 2020.
MEMORIAL EVENTS
No memorial events are currently scheduled.
To offer your sympathy during this difficult time, you can now have memorial trees planted in a National Forest in memory of your loved one.
Funeral services provided by:
Griffiths-Hovendick Chapel - Beatrice
GUEST BOOK
0 Entries
Be the first to post a memory or condolences.