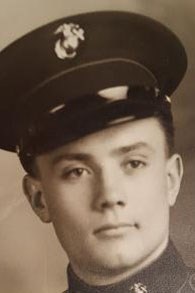 William (Bill) Frank Robertson passed away October 28, 2020 at his home in Fallon, NV. Bill was 98 years old. Bill was a World War II veteran who served with the Marine Corp 6th Division, E Co., 2nd BN, 15th Regiment. He was in the Pacific theater with landings on Guam, Eniwetok and Okinawa, where his unit was awarded the Presidential Unit Citation for their actions. Bill was a General Contractor in construction as part owner of Robertson Construction Company in Beatrice for most of his career. He finished his career as a carpenter in Las Vegas, NV.

Services will be held on November 12, 1:00 p.m. at the Veterans Cemetery in Fernley, NV.

To plant trees in memory, please visit our Sympathy Store.
Published by Beatrice Daily Sun on Nov. 7, 2020.
MEMORIAL EVENTS
Nov
12
Service
1:00p.m.
Veterans Cemetery
, Fernley, Nevada
Funeral services provided by:
Smith Family Funeral Home - Fallon
GUEST BOOK
2 Entries
Our thoughts and prayers are with you and your family. In loving sympathy, Terry and Steph Perkins
Stephanie Perkins
November 9, 2020
I knew the brothers in Robertson Construction. Bud Robertson and I were in the Marine Reserves together in Lincoln Nebraska in the 50s. My sympathy´s to the family. To Bill, thanks marine you will be missed. SemperFi
Larry D McKee
November 7, 2020