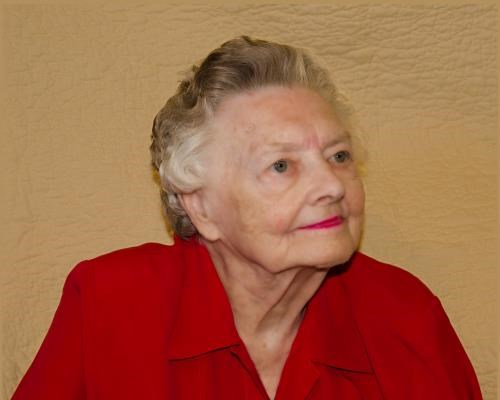 1924-2018 Shirley Josephine Bugh was born on October 4, 1924 in Burtrum, Minnesota, and passed peacefully into the loving arms of her Heavenly Father on July 22, 2018. Her parents, Ruth and Vernon Bugh, reared Shirley, her sister Dale, and her four brothers, Vernon Jr., Keith, Cecil, and Garry, on a typical Midwestern farm through the Great Depression. When Shirley graduated from high school in 1942, she moved to Minneapolis to enroll in business college. A government recruiter visited the school looking for young women with business skills to work at wartime government installations as clerks, typists, and bookkeepers. Responding to the urgency of the war effort, Shirley, with $50. in her purse to cover transportation and living expenses until she could expect her first paycheck thirty days hence, traveled first to Hill Field Air Base in Ogden, Utah, and then on to the new government facility (part of the Manhattan Project) called Hanford Engineer Works being built in Hanford, Washington. All new employees were told they would receive no information about the work being done at Hanford, but they could rest assured that they would be working to bring about a quicker end to the war. Thus began a work regimen of ten hour days, six days a week, with the only acceptable excuse for absence being severe illness. At Hanford, Shirley typed employment papers for incoming workers. One day a co-worker introduced Shirley to a handsome young Tennessean, B. W. (Lew) Lewallen, a liaison between the DuPont Company and the U. S. government in the operation of the Manhattan Project facility. The two were married on December 9, 1944, in Minneapolis. With the end of the war in sight, they headed south to Orange, Texas, where the DuPont Company was building a peacetime facility. For a while, both Shirley and Lew worked for DuPont in Orange; however, Shirley became a stay-at-home mother in 1947 when their first child, Stephen Keith, was born. Another son, Russell David, followed in 1948, and daughter Ruth Ann completed the family in 1950. The next dozen years were spent in Augusta, Georgia, and North Augusta, South Carolina, as Lew continued his career with DuPont at the Savannah River Plant outside North Augusta. In 1963, the family returned to Texas as DuPont transferred Lew first to Beaumont, then to Victoria, and finally back to Orange. Except for a two-year stint back in South Carolina in the 1970s, Shirley lived in Orange from 1967 through 2012. In Orange, Shirley worked for many years for the Orange County government in several different positions, the last one an elected position as the County Treasurer. To avoid confusion because a co-worker was also named Shirley, Mother was dubbed "Miss Lou," and she has been called this by her many Orange County Courthouse friends ever since; she retired in 1989. Lew passed away in 1990, and Shirley devoted her time to her church, her family, reading, and her many Orange friends. Shirley was predeceased by her parents, her husband, and one brother, Cecil Bugh. She is survived by her three children: Stephen K. (Tess) Lewallen, Russell D. Lewallen, all of Houston, and Ruth (James) Stover of Plano, TX. Her grandchildren include Amy E. Fruge (Andy) Huerta of Wilmington, NC, Clayton K. (Kianna) Fruge of Sachse, TX, David N. (Holly) Lewallen of Mont Belvieu, TX, and Tammy Lewallen (Shane) Marshall of Huffman, TX. Shirley is also survived by ten great-grandchildren: Brandon, Kassie, Hudson, and Hayden Lewallen, Marissa and Matraca Marshall, Zachary and Abigail Huerta, and Megan and Mackenzie Fruge. A memorial service will take place at 10 a.m. Saturday, July 28 at First Presbyterian Church in Orange TX, 902 Green Avenue, with a reception to follow in the Fellowship Hall. In lieu of flowers, Shirley's love of and compassion for children may be honored by contributions to Presbyterian Children's Homes and Services, 5920 W. William Cannon Drive, Bldg. 3-Suite 100, Austin, TX 78749. 800.888.1904
Published by Beaumont Enterprise from Jul. 26 to Jul. 27, 2018.
To plant trees in memory, please visit the Sympathy Store.
MEMORIAL EVENTS
To offer your sympathy during this difficult time, you can now have memorial trees planted in a National Forest in memory of your loved one.
MAKE A DONATION
MEMORIES & CONDOLENCES
0 Entries
Be the first to post a memory or condolences.