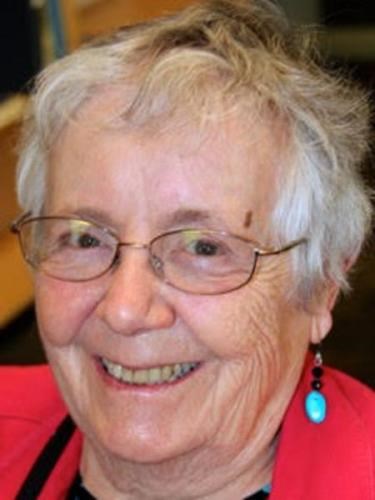 Evelyn Wright, "Evy", was born in Crystal Falls, Michigan, on February 4, 1929, to Carl and Hilma Cullander. She graduated from Evanston Township High School in 1946 and married David Dobson Wright on June 6, 1949, in Evanston, Illinois. Evy raised her four children alone after David died in April of 1965. Evy earned her teaching certificate from Northern Illinois University and began teaching elementary school at the Lab School in Evanston in 1966. After accepting the position of Associate Professor of English at Western Washington State University in Bellingham in 1972, she completed her Doctorate in English Education at Northwestern University in 1976. She retired in 1996. Evelyn was a treasured Mother, Nana, Aunt, friend, teacher and mentor to many. After her retirement, she expressed her commitment to social justice as Associate Editor of the Journal of Educational Controversy. She enjoyed and supported music, theater, the opera and arts and happily traveled inside and outside the US with friends. She was a valued member of a writing club and a reading group. She was best known for her generosity and warm welcome to new and old friends and family with home-cooked meals. Evelyn died of complications due to Lupus on Friday, September 22nd, peacefully, with her family around her. She is survived by her four children, David (Holly), Deborah, Joanne and Daniel (Larysa), seven devoted grandchildren and many loving friends. A memorial service will be held on Saturday, November 4th at 1pm followed by a reception at St. John's Lutheran Church, 2530 Cornwall Ave, Bellingham WA, Cara Tanis, Pastor Donations in honor of Evelyn Wright may be made to American Friends' Service Committee, 1501 Cherry Street, Philadelphia, PA 19102. Designate it "in memory of Evelyn Wright".
Published by Bellingham Herald on Oct. 7, 2017.
To plant trees in memory, please visit the Sympathy Store.
MEMORIAL EVENTS
To offer your sympathy during this difficult time, you can now have memorial trees planted in a National Forest in memory of your loved one.
MAKE A DONATION
MEMORIES & CONDOLENCES
6 Entries
I'm heartbroken to hear of Evelyn's passing. I was fortunate to have her as a teacher at Western in the late 1980's. We even went camping in eastern Oregon together to attend a Pow-Wow outside of La Grande. I considered her to be my only mentor. I last spoke with her on the phone in 2015 or so. I have always been worried that I'd never see her again before she passed away, and that has happened. She spoke with great love about her children and grandchildren. What an amazing soul she was. I will miss her absence from this world. Much love to you, Evelyn. You were an inspiring teacher and a great soul. ~Donelle Bunch, New Mexico
Donelle Bunch
Student
November 19, 2017
I will miss Evelyn Wright's easy smile, gravely chuckle and contagious curiosity for life. I met Evelyn in the 1980s, when I was a Western Washington University undergrad working on the editorial staff of "Jeopardy Magazine." Her office was across the hallway, so we chatted about literature--of course. For decades afterward, we'd bump into each other at Village Books. Always, Evelyn's warmth and curiosity for new literature and life remained untarnished. Once I asked, HOW do you stay so young? She laughed her notable laugh and said, This may sound funny...but I think part of the secret is stairs. I walk them every chance I can. Evelyn has climbed the stairs to the other world but she remains bright in my ear's memory.
Jennifer Hahn
October 26, 2017
I will miss a dear colleague and friend of some 40 years who was always there for all of us. Evelyn was a caring and giving person with a compelling social consciousness who made this world a little brighter. Her legacy is in all the students she ever taught, all the inquiring ideas she evoked on our professional journal, all the friends whose lives she enriched, and all her children and family that remained the most important part of her life.
Lorraine Kasprisin
October 14, 2017
I enjoyed working with Evelyn on the board at Spinnaker Reach. She was a person who moved there and then became involved. Loved her sweet disposition and her knowledge and helpful spirit.
Barbara Curry
October 14, 2017
I got to know Evelyn through her work with the Academy for Lifelong Learning at WWU. We always wrapped up work conversations quickly so we could have a nice chat and catch up on what was going on in each others lives. She was such a wonderful person. So positive. I will truly miss her.
Tracey Bertels
October 11, 2017
No one lit up a room like Evelyn. Years after her retirement from WWU, she would walk into a campus event and faculty would spring up to run and embrace her. What a joy it was to know her!
Laura Laffrado
October 8, 2017
Showing 1 - 6 of 6 results