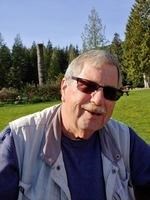 BORN
1946
DIED
2021
William Charles Busby
November 21, 1946 - August 9, 2021
Bellingham, Washington - Last residence was in Abbotsford, British Columbia.
Wiliam (Bill or Buz) Busby was a resident of Bellingham from November 21, 1946 until January, 2008. Bill graduated from Bellingham High in 1964. During his high school Bill was a life guard at Lake Whatcom. He attended Skagit Valley until he enlisted to serve in the Vietnam War. August 29, 1966 he joined the US Navy and served aboard the USS Eldorado as an Engineman. Georgia Pacific employed Bill from May, 1972 until June of 2001. Bill returned to Skagit Valley College to become a truck driver and was then employed by Brown Line LLC until 2009. Bill married Jeannette Warner in May, 1973 and became the proud parent of Jolene, Amanda and Bryce. He loved the many family camping trips during summer holidays. Sadly Jeannette passed away in 2001. Bill married Sharon Kelsey in 2007 and moved to Abbotsford, B.C. in 2008. He volunteered with St. John Ambulance Dog Therapy program with Bill's dog Molly and they spent many hours visiting patients in the Cancer Ward. Bill was in a vehicle accident on June 22nd and had been recovering at home since July 9th, when he unexpectedly passed away on August 9th. Bill was predeceased by Jeannette (Warner) Busby, his parents, Ernest and Helen Busby, and sister Cheryl Patton. Bill is survived by his wife, Sharon Busby, daughters, Jolene Busby and Amanda (Derrick) Lewis and son, Bryce Busby, sister in law, Charlene (Joe) Heller and brother in law, John Patton, Sharon's family and extended families. There will be a Graveside Service at St. Peter's Catholic Cemetery on Monday, October 4, 2021 at 2:00 p.m.