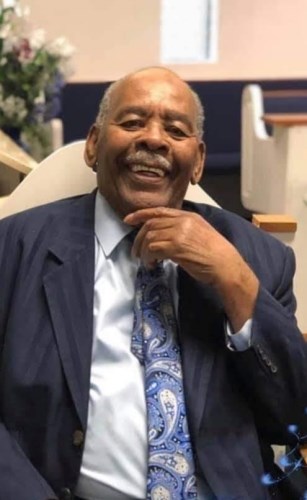 The Man: Elder David Barnett was born on August 24, 1935 in Medon,TN to the union of Ruth Carter and L.Q. Barnett. He was the second oldest of eleven siblings. He received his formal education at Span Rosenwahl Public School Medon, TN. He continued his education at Blackhawk Technical College in Janesville, WI. He moved from Tennessee to Beloit, WI in 1967. He worked for Warner Electric, Fairbanks Morse, Beloit School District and finally retiring from Beloit Corporation in 1999. On December 16, 1972 he married the love of his life Norva (Maurice) Marshall of LaGrange IL. Together they have four children and five grandchildren.

The Servant: Elder Barnett served in the United States Army and was a Veteran of the Korean Conflict Era and Peacetime. He was honorably discharged July 5, 1957. He gave his life to Christ at a young age. His first scripture learned was John 3:16...For God so loved the world...He accepted his call into the ministry in April of 1983 and was ordained and received his ministerial license under the leadership of the late Pastor Ernest K. Roman of New Covenant Deliverance Tabernacle. He was a member of the Beloit Ministers fellowship for over 20yrs. Elder Barnett went on to serve in his calling by spreading the Gospel as a Chaplin for the Winnebago County Jail. He organized Brothers to Brothers bible study as well as counseling and praying for many. He continued his ministry at Fountain of Life THC under the leadership of Pastor Lawrence A. Hoskins until the time of his death. He will forever be remembered as a Gospel giant and legend of the Beloit community for his decades of singing and preaching the Gospel of the Lord Jesus Christ. He started singing the Gospel as a young man with Sons of Dixies of Jackson TN. After moving to Wisconsin, he was one of the original members and lead singers of the Skylark Gospel Singers. In his years of singing, he was privileged to sing with many nationwide Gospel greats; Canton Spirituals, Spencer Taylor and the Highway QC's, Willie Neal Johnson and the Gospel Keynotes, George Dean and The Gospel Four and many more. He was instrumental in organizing the "Men of Fountain Male Chorus" and continued to sing and travel with them until his health began to decline. Elder Barnett sang his last song at Fountain of Life THC (his church home) on November 1, 2020 "I'm alright now".