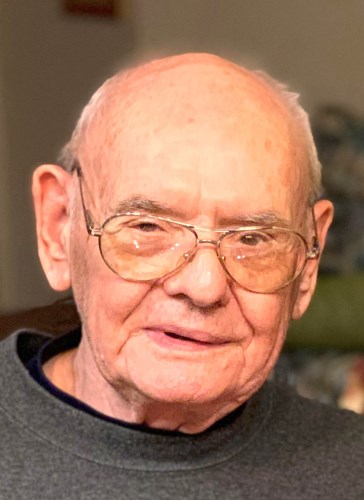 A self-proclaimed hellion, he attended Notre Dame school, where he won the Cartier Club prize for retaining the highest average in arithmetic. After graduating from the former Adams High, he started an apprenticeship at General Electric, and in 1958 he joined the United States Air Force, and proudly served on Texas Tower 4. Ed received a Bachelor of Science degree in engineering from the University of Massachusetts in 1967 and began his long-time career with GE where he worked in the Aerospace and Plastics divisions until his retirement in 1997. He served as President of the Berkshire Chapter of IEEE, a member of the Society of Plastics Design Engineers, and Vice Chairman of the American Welding Society.

True to his motto of "Family First," he and his wife Mary Urbanek, whom he married on September 23, 1961, moved to San Antonio in 1997 to be closer to his daughters and grandchildren. He enjoyed swimming, reading, keeping up with the latest technology, and spending time with his family and friends. He was a communicant of Notre Dame parish in Adams and St. Elizabeth Ann Seton in San Antonio.

Ed was preceded in death by his parents and his loving wife. He leaves his daughters, Jennifer Levey of New York and Julie and Marvin Ring of San Antonio, his brother Richard and Dona Stumpek of Massachusetts, and his grandchildren, Madison and Johanna Levey and Olivia, Evan, and Sami Ring, as well as several nieces and nephews and countless friends.

A memorial service will be held in San Antonio on Thursday, May 6 at 10:00 a.m. at St. Elizabeth Ann Seton Catholic Church. Memorial donations may be made to the American Heart Association online at http://www2.heart.org/goto/EStumpek.

You are invited to sign the Guestbook at www.porterloring.com

Arrangements are with: PORTER LORING MORTUARY NORTH, 2102 North Loop 1604 East, San Antonio, TX 78232 - (210) 495-8221.
To plant trees in memory, please visit our Sympathy Store.
Published by The Berkshire Eagle on May 8, 2021.
MEMORIAL EVENTS
May
6
Memorial Mass
10:00a.m.
St. Elizabeth Ann Seton Catholic Church
8500 Cross Mountain Trail, San Antonio, TX
Funeral services provided by:
Porter Loring Mortuary North
MAKE A DONATION
Please consider a donation as requested by the family.
MEMORIES & CONDOLENCES
Sponsored by The Berkshire Eagle.
2 Entries
I will always feel blessed that I could call your Dad friend (and your Mother too). I will miss our calls and his summer visit.
Kay Pierce
May 7, 2021
Ed was a close professional friend. God Bless his family
Jeffrey Frantz
May 6, 2021
Showing 1 - 2 of 2 results