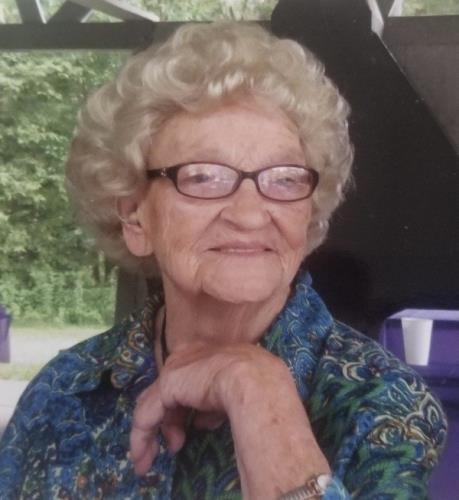 "Mother, you left us beautiful memories, your love is still our guide, although we cannot see you, you're always at our side."

Scottie was born on September 13, 1923 in Hersey, to Willis and Bernice (Blanchard) Ramey. She graduated from Big Rapids High School in 1941.

She married Wayne Edgar Peacock in 1943 and they made their home in Morley, where they raised 14 children.

Scottie spent many years as a homemaker and tended to the family farm, raising milk cows, pigs, chickens, and goats, grew a large garden every year and sewed clothes for her many children. She later worked as a cook at several local restaurants.

She was a member of the American Legion Post 554 Women's Auxiliary, and served as their president for seven years. She was also a member of the Eagles of Big Rapids, and the Red Hat Society.

A private family service will be held at Oakdale Cemetery in Hersey.

A celebration of Scottie's life will take place at 1 p.m., April 23, at the American Legion Pavilion, 2560 Northland Dr., Morley.

To share a memory or leave a condolence visit plaisierfuneral.com/obits/Letha—Marie—Peacock.