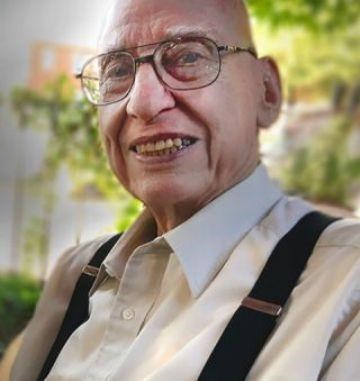 Claude Dwain Roswurm was born outside of Council Grove, KS, on August 17, 1931, the only child of William & Hazel Sillyman Roswurm. He passed away on July 4, 2021, in Norman, OK.

Memorial services are scheduled for a later date in his beloved Flint Hills. Claude married the love of his life, Melba Ernst, while on leave from the US Army during the Korean War & graduated from Kansas State University.

He began his long career with the Bureau of Land Management in 1960. After retiring from the BLM in Billings, Claude formed his own right of way company. In 1995, he & Melba returned to live in Americus, Kansas. They relocated to Goldsby, OK, in 2015 to live with their son & his family. Throughout his life, Claude was an active member of several Masonic bodies.

He served in many positions, culminating as OES Worthy Grand Patron in 1989-90. Claude was an active member of the First United Methodist Church, Optimists & Kiwanis clubs. He served on local government & community boards. Claude was a dedicated family man who found great joy in being outside. His smile was infectious, and his friendly personality was hard to forget. Claude was dearly loved by his immediate family, extended family, and many friends.

He was preceded in death by his parents & his loving wife Melba. Claude will be returned home to Kansas to be interred with his wife and parents in the Americus cemetery.

To plant trees in memory, please visit our Sympathy Store.
Published by Billings Gazette on Jul. 18, 2021.
MEMORIAL EVENTS
No memorial events are currently scheduled.
To offer your sympathy during this difficult time, you can now have memorial trees planted in a National Forest in memory of your loved one.
Funeral services provided by:
Wadley's Funeral Service Inc
MAKE A DONATION
MEMORIES & CONDOLENCES
Sponsored by Wadley's Funeral Service Inc.
1 Entry
Nancy, I wanted to offer my condolences to you and your family on the loss of your father. I hope you have many happy memories of your time together to give you some comfort in your grief and cherished stories to share with your children.
Dave Williams
July 21, 2021
Showing 1 - 1 of 1 results