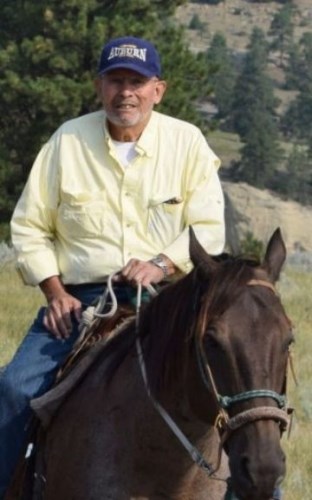 David C. Madril, a retired 26 year career U.S. Air Force NCO was proud of his military service. He traveled the world extensively and considered himself fortunate for that experience. He served his country in Europe during the Cold Water and Vietnam.

He was present in Berlin on the day the Berlin Wall was erected in 1961. After retirement he was a civilian contractor in the Middle East establishing U.S. military war time medical assets for use in the event of a military mission requirement. He began his third career with the U.S. Geological Survey (USGS) as an administrative officer serving in California, Virginia, Colorado and Montana.

He helped establish the USGS Northern Rocky Mountain Science Center at Montana State University in Bozeman, and retired in June 2003 after it was firmly established. In Bozeman he sponsored two international high school exchange students and took part in the Gallatin County Big Brother Sister/Program.

He continued public service by volunteering with the Colorado National Monument, in Fruita, Colorado, the Billings Police Department, Billings Chamber of Commerce Visitor Center, and Yellowstone Country Sheriff's Office. An avid high school cross country, track and volleyball fan, he traveled throughout the Pacific Northwest in support of Billings athletes enabling him to pursue his hobby of photography. He truly felt there were only a few remaining items on his 'bucket list.'

During this difficult period, there will not be a service. In lieu of flowers, Dave would appreciate you support your local school sporting programs.

To plant trees in memory, please visit our Sympathy Store.
Published by Billings Gazette on Jan. 24, 2021.
MEMORIAL EVENTS
No memorial events are currently scheduled.
To offer your sympathy during this difficult time, you can now have memorial trees planted in a National Forest in memory of your loved one.
GUEST BOOK
8 Entries
Dave was our neighbour in Panfield in the UK in the 60s.What a great friend and neighbour he was and we loved his wicked sense of humour .It has been lovely being able to keep in touch all these years .You will be missed Dave by so many people.
Barbara Barnes
Neighbor
January 25, 2021
Miss you Dad
Jim
January 24, 2021
Dave was my neighbor and good friend . I am proud to say I that new him for the 8 years that I did . I will miss our talks and my kids waving to Poppa Dave . R.I.P good friend .
Larry Thompson
January 24, 2021
I graduated from high school with Dave, he was one of the leaders in our class of 1958. I can´t help but mention that he ended up in the town where I was born, Billings, Montana.
Brad Fregger
January 24, 2021
I´m so sorry to hear about David. It was interesting reading about all of the many things that he accomplished thru out his life. I first met him at a high school track meet I think about 6 years ago. He traveled around to all of the AA games and meets and would take pictures. He would take hundreds or thousands of pictures of the kids participating in the different events and put them on his website for parents. Great guy!! His presence and his photography will be missed!!!!
Amy Baker
January 24, 2021
May you Rest In Peace Dave. We were USGS colleagues years and years ago and remember him fondly.
Cheryl Music
Coworker
January 22, 2021
Worked with Dave at USGS. Wonderful man. Will be sorely missed. RIP Dave. Gone but not forgotten.
Brenda Fulk
Coworker
January 22, 2021
Served in the Air Force with David both in Vietnam a d Germany!! Very likeable guy & always was helping someone!! Rest in Peace Brother Dave!! You will never be forgotten!!
Chip & Mary Bahr
Served In Military Together
January 21, 2021