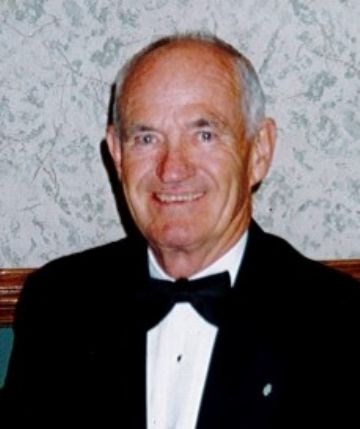 On Dec. 2, 2020, Jack Rehberg passed away peacefully in his home from an aggressive form of T Cell Lymphoma. He was comforted by the many blessings that accompany a full life, well lived.

Jack was born on May, 17, 1929, in Billings, to Wallace and Dorothy (Hamilton) Rehberg. He was raised on the family dairy farm west of town and graduated from Billings Senior High. He earned his Bachelors of Science Degree in Dairy Manufacturing (go figure) from Montana State University and then returned to Billings to apply his new knowledge.

Playing the leading lady in this adventure was his wife, Patricia (Cooley), the neighbor girl he fell in love with as a boy and was determined to marry. With a wink and a nod from her father, he foiled any would be suitors by parking his car down the street in front of her house to give the impression that her dance card was filled for the evening. Over time the strategy worked and Jack and Pat married on June 27, 1952, remaining happily married for over 68 years.

A jack-of-all-trades, his professional career began by co-managing the Midland Guernsey Dairy Farm on Rehberg Lane with his brother Wally, and the Milky Way Drive-In across from Eastern Montana College (MSUB) with his mother, Dorothy. At the Milky Way, he served double duty as manager and short order cook for nearly 20 years. Not content with the rigors of bottling milk in the morning and flipping burgers until closing time, Jack also found time to embark on a journey of service that would come to define him as a man, a mentor, and a leader in his community.

Throughout his life, Jack was an active member of the Freemasons where he served as Master for Ashlar Lodge #29, Grand Master of Montana (1980-1981), and Member of the Scottish Rite Supreme Council for 28 years, achieving the rank of 33rd degree. He was especially proud of his time spent as an Advisor to the Billings Chapter of DeMolay where, leading by example, he helped young boys develop into successful men by quietly instilling in them the ethics of hard work, accountability, and self-confidence.

Jack's love of politics led him to the halls of the State Legislature, where he served in the Montana House of Representatives from 1963 to 1967 and in the State Senate from 1969 to 1971. He followed politics his entire life and was a staunch conservative, often giving his 'liberal' friends a bad time.

After the Milky Way closed in 1971, Jack changed his focus and became Executive Director of both the Montana Petroleum Association and the Rocky Mountain Oil and Gas Association of Montana. When the opportunity came for a new learning experience in the field of banking, he accepted the challenge of serving as Vice President of Security Federal Savings and Loan before moving on to President, where he oversaw the bank's expansion to 23 locations across Montana and guided the change from a savings and loan to a bank.

Jack loved music. Whether playing the piano for friends and family, the organ at St. Stephen's Episcopal Church, the calliope in parades for the Al Bedoo Oriental band, or the occasional polka on the accordion, Jack could tickle the ivories like the best of them. He was especially proud of his brother Bill, who played the French Horn and became an accomplished musician in New York City.

Jack's zest for life was tempered by three guiding principles: hard work, accountability, and service to others. He applied these principles to everything he did and had the uncanny knack to subtly instill these principles upon those around him. In his free time, he enjoyed camping, boating, traveling and gardening. (He kept his geraniums alive for over 30 years.)

He is survived by his wife Patricia, his children Shanna (David) Henry and Dennis (Janice) Rehberg, his sister Jeanine Lee, his five grandchildren, Jaclyn, Ryan, AJ, Katie, and Elsie whom he loved equally (but everyone knows he had a favorite), and four great-grandchildren.

A private service for family will be held at a later date. Memorials in Jack's name can be made to the Eugene Herman Language Clinic of the Scottish Rite, 514 14th St. W, 59102.

To plant trees in memory, please visit our Sympathy Store.
Published by Billings Gazette on Dec. 6, 2020.
MEMORIAL EVENTS
No memorial events are currently scheduled.
To offer your sympathy during this difficult time, you can now have memorial trees planted in a National Forest in memory of your loved one.
MAKE A DONATION
MEMORIES & CONDOLENCES
19 Entries
Pat and all of your family, I cherish the many years that Jack and I served on the Supreme Council together. We visited each other in Montana and North Carolina as genuine family friends and brother Masons. May God bless all of you and keep you safe in this terrible time in our nation and world. I send my sincere condolence to all of you.
H. Lloyd Wilkerson
January 1, 2021
Jack was a friend of my grandfather John A Keefe and father George Horton. They both always spoke highly of Jack and everything that he accomplished. Montana will miss him
Tom Horton
December 24, 2020
Jack was a fine man, Mason and husband. My sympathy goes to Pat and family.
Gene Christiansen
Mesa AZ
Gene Christiansen
Friend
December 21, 2020
Sincere condolences. I remember Jack from my time in DeMolay in Laurel. That experience defined my life I and I will be forever thankful for men like Jack that helped us become men.
KENNETH PECK
December 11, 2020
He was an amazing man. So sorry about his passing.
Vera-beth Johnson
December 9, 2020
Dennis, Jan and Family Condolences on the loss of your father. Montana has truly lost one of its best.
Lance Pedersen
December 8, 2020
I am one who was a member of the Billings Chapter of the Order of DeMolay when Jack was advisor, and am thankful for that connection. His connection with members of my family for nearly 60 years has meant much to us. I am saddened by his death but thankful for his life.
Gary Armstrong
December 8, 2020
I am so sorry for your loss.
Lisa Matovich-Brooke
December 7, 2020
Jack. Thanks for all of your guidance with the Demolay program. You will not be forgotten and you will always be thought of. May God bless you and your family.
Glenn Kanvick
December 7, 2020
Pat, sorry to read of your husband's passing!
Darlene (Schroeder) stenberg
December 7, 2020
Pat and family, Very sorry to hear of your loss of Jack. He was a class act. Our thoughts and prayers are with you during this very difficult time.
Mike and Deena Jurak
December 6, 2020
Pat and family, we were so very sorry to hear of Jack´s passing. Our friendship with you goes far back. You two introduced Pat and I 50 years ago!., we have many wonderful memories of you. May your memories of the great life he lived help you through this time. He will be missed by all who were lucky enough to know and love him. He left the world a much better place! May he Rest In Peace.
Joyce and Pat Phillips
December 6, 2020
Denny, Janice, and family, I am so very sorry to learn of your father's passing.
Ardyce (Miller) Endresen
December 6, 2020
Jack was the first strong leader in my life. He will always be in my thoughts!
Randy Hannah
December 6, 2020
Our thoughts & Prays are with Pat & Family . His Christmas letters will be missed .
Dave & Jane Herman
December 6, 2020
I am so sorry for your loss. The world of young men that went through Demolay will always thank him for his kind leadership, and the new boys will miss that.
Jan McCandless
December 6, 2020
My thoughts and prayers are with you, Pat and the family you are blessed with a wonderful life if memories. God bless you all.
Becky Zent
December 6, 2020
Sincere sympathy to you, Pat. What a full and wonderful life you shared with Jack.
Vera Bassett
December 6, 2020
Sorry to hear of your loss.
Jon Doggett
December 6, 2020
Showing 1 - 19 of 19 results