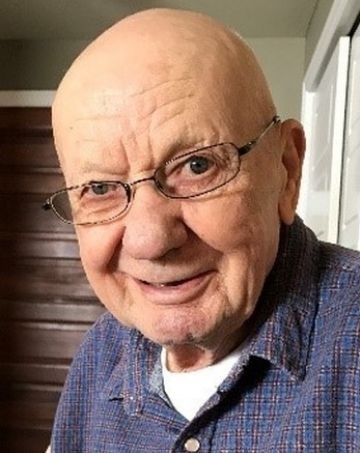 Meeting him on The Other Side was his bride, Heather Thompson Balock, whom he married on July 3, 1958. Heather passed Valentine's Day 2018. Dad long awaited this eternal reunion.

The eldest child of John and Mary Balock was born at home Oct. 24, 1927 in Absher. John was big brother to three sisters, Francis, Eveyln and Cathleen; all preceded him in death.

John lied about his age to get his first Milwaukee Railroad job (fired when found out he was 14) and never lost his love of trains, especially steam engines.

John graduated from Melstone High School in 1945 and enlisted in the U.S. Navy in time to serve in World War II. Dad was proud to go on a Big Sky Honor Flight to Washington, D.C., in 2013.

At the age of 23, John bought his first piece of heavy equipment and started Balock Excavating, now in its 70th year of business. His son Ed and grandson Garrett move and work the same Montana dirt and rock that Dad did until he was 80 years old. Great-grandson Payson digs big trucks since birth in 2017, so Dad knows Fourth Generation Balock excavator training has begun.

Grandma Mary Balock played matchmaker when Mom moved to Melstone as a new school teacher. Grandma invited Heather for Sunday dinner after church. Of course, her single son, John, was there and Grandma was a good cook.

John served on the Roundup hospital board that built the nursing home. He donated labor and machinery to bring water to the Roundup golf course. He volunteered with Melstone Fire Department. Balock Excavating sponsored men and women's bowling teams.

Thank you to the caregivers and residents of Novak Cottage at WyndStone.

At his request, there will be no services. Wier Funeral Home in Roundup is entrusted with cremation.

To plant trees in memory, please visit our Sympathy Store.
Published by Billings Gazette on Jul. 18, 2021.
MEMORIAL EVENTS
No memorial events are currently scheduled.
To offer your sympathy during this difficult time, you can now have memorial trees planted in a National Forest in memory of your loved one.
Funeral services provided by:
Wier Funeral Home
MAKE A DONATION
MEMORIES & CONDOLENCES
Sponsored by Wier Funeral Home.
0 Entries
Be the first to post a memory or condolences.