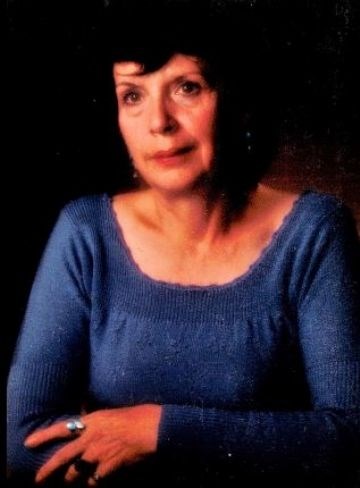 She grew up in Helena and graduated early from high school. She then attended Carroll College but chose to marry rather than pursue a nursing career. At 18 she married Robert Funk on July 30, 1949, in St Helena Cathedral. They had fifteen children. She loved children, especially babies, and the home was often filled with neighborhood kids who she treated as her own.

Marie was a devout Catholic; her abiding faith saw her through the dark times in her life. She not only believed in miracles but expected them and saw their fruition. She was a woman of incredible energy and an organizational whiz, raising homemaking to a fine art while doing an admirable job of keeping an unruly hoard of children in check.

Marie and Robert divorced after 23 years and, with 10 dependent children, she moved from Helena to Billings. Thereafter she returned to school, eventually earning a master's degree in Drug and Alcohol Rehabilitation. She essentially did a double major in art and produced a body of work in a variety of mediums. She worked for several years in her chosen field. After she contracted throat cancer and had a subsequent laryngectomy, she left counseling career. Undeterred, she returned to school and studied art for another two years. Her interests included art, music and dance. She had a quick, curious mind and loved to read.

Marie passed away peacefully in her sleep on June 6, 2021, after one of her typically busy days. A special thank you to Heritage Acres Nursing home in Hardin, Montana for the love and care they provided to our beloved Marie.

Marie will be remembered for her beauty and grace, creativity, generosity of spirt, determination, profound faith and courage. And the fact that she loved to dance! She will be sorely missed by the many whose lives she touched in countless ways.

A Rosary will be offered for Marie on Monday, July 19, 2021, at 6pm at Retz Funeral Home in Helena, Montana. Her funeral mass will be on Tuesday, July 20, 2021, at St. Helena Cathedral with interment at Resurrection Cemetery directly following.