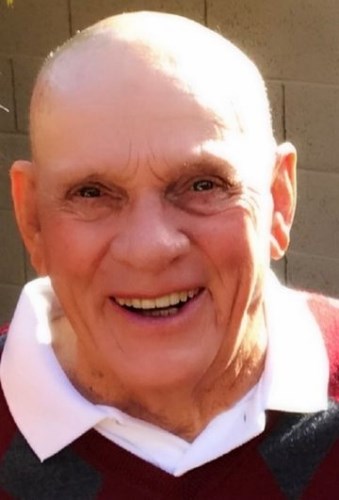 Russ was born on June 24, 1934, to Alex and Mary Hein in Billings. He was one of eight children and was raised on the south side of Billings throughout his youth. His father passed away when Russ was in high school, but he continued on to graduate from Billings Senior High School in 1954. Russ followed the family tradition of playing football and excelled at sports, like his brothers.

Following high school, he worked for the Billings City Engineers for two years, when he was drafted into the Army in 1956. He served two years in the Army before returning home to the love his life, Barbara Pederson. They married May 7, 1960, and began their family.

To this union, three sons were born. Brad, Brent, and Gregory Hein were the apple of Russ's eye and he made a point to teach them everything from golf, fishing and woodworking. Russ and Barbara grew their family in Billings, and built their home, where he lived until his passing.

Russ worked in sales for most of his life and made friends at every stop along the way. His big smile and infectious humor were quick to make people flock to him and he relished every moment of it.

After retirement, he worked part time serving for the local school district #2 and loved his work.

Russ had a passion for his family and his yard (we are sometimes uncertain of the order), and we know that he is looking down on us while he meticulously maintains the grounds of Heaven.

A family wake will take place followed by a memorial service in the spring.

To plant trees in memory, please visit our Sympathy Store.
Published by Billings Gazette on Oct. 29, 2020.
MEMORIAL EVENTS
No memorial events are currently scheduled.
To offer your sympathy during this difficult time, you can now have memorial trees planted in a National Forest in memory of your loved one.
Funeral services provided by:
Michelotti Sawyers Mortuary & Crematory
GUEST BOOK
4 Entries
Russ was 2 years ahead of me at Billings Senior, he was well respected by the underclass men. He was a Good Man! I am sure there is a place in Heaven for him.
John Bohlinger
October 29, 2020
I am sorry for your loss I grew up with Russell and Gary. Gary and I were in the same class and went to Garfield and BSH.
Everett Glenn
October 29, 2020
We're all going to miss Russ. And you're right,that infectious smile & the humor.Barb, we will miss him for sure. Keep that golf course groomed.
Chuck &Bobbi Rhodes
October 29, 2020
Barbara, so sorry to hear of your loss.
Cathy Rogers
October 29, 2020