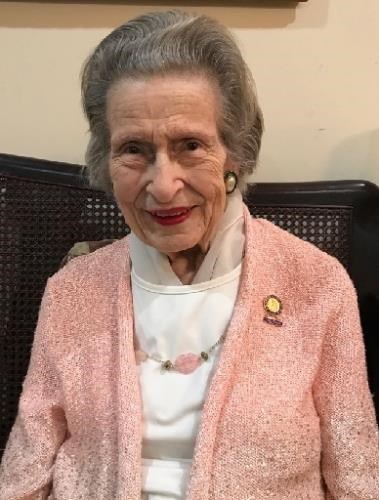 BORN
1922
DIED
2021
Dr. Frances (Fran) Larraine Tunnell Carter, EdD, age 99, of Birmingham, AL went home to be with the Lord on May 31, 2021. Fran was born May 21, 1922 in Springville, MS to Mary Annie McCutcheon Tunnell and David (Bud) Atmund Tunnell. Fran taught elementary/early childhood education and home economics at Samford University for 27 years and was an editor for Woman's Missionary Union. During WW II, she worked as a "Rosie the Riveter," building B-29 airplanes in Birmingham. In 1998, she founded the American Rosie the Riveter Association, a national organization for Rosies, their descendants, and others interested in their legacy. She presented close to 400 programs dressed as Rosie the Riveter in 18 states, first with her husband, who was a paratrooper in WWII, and continuing after his death in 2014. She was a long-time member of Dawson Memorial Baptist Church, where she taught Conversational English (ESL) for many years. Wherever she lived, she usually taught Sunday School, starting at age 12 and continuing until age 90. She was Birmingham Woman of the Year and Volunteer of the Year, and in 2016 she received the Woman in American History Award from Daughters of the American Revolution. She authored numerous books and educational materials for children, as well as many articles in professional and denominational journals. She was a LtCol in Civil Air Patrol, a member of the Silver-Haired Legislature and Silver-Haired Congress, national Executive Director of Kappa Delta Epsilon education fraternity, and national President of the National League of American Pen Women. She and her husband led more than 15 short-term mission trips to China, Indonesia, Russia, Honduras, and Mexico, and taught a semester at both Anhui Normal University in Wuhu, China and Hong Kong Baptist University. Fran was preceded in death by her beloved husband of almost 68 years, Dr. John Thomas Carter. She is survived by her son, LtCol Wayne Carter, USMC, Ret (Regina), and daughter Nell Carter Branum (Jim), as well as 7 grandchildren-Jon Carter (Rachel), David Carter (Susana), Stephen Carter (Jen), Rebekah Carter Wilson (Ben), Tim Branum (Amanda), Daniel Branum (Stephanie), and Sarah Branum Law (Jordan)-and 16 great-grandchildren. A memorial Celebration Service will be held for family members, and will be available for online viewing at www.drfrancarter.com, starting June 23. There will be no graveside service, as Fran requested that her body be given to the UAB School of Medicine. In lieu of flowers, memorial gifts may be made to the John and Fran Carter Endowed Scholarship for Teacher Education at Samford University (800 Lakeshore Drive, Birmingham, AL 35209), American Rosie the Riveter Association (PO Box 241, Greens Farms, CT 06838), or the John T. Carter Agricultural College in Liberia, through Brewster Road Community Church in Birmingham (1661 Brewster Road, Birmingham, AL 35235).
To plant trees in memory, please visit our Sympathy Store.
Published by The Birmingham News from Jun. 12 to Jun. 13, 2021.
MEMORIAL EVENTS
No memorial events are currently scheduled.
To offer your sympathy during this difficult time, you can now have memorial trees planted in a National Forest in memory of your loved one.
MAKE A DONATION
MEMORIES & CONDOLENCES
Sponsored by The Family.
7 Entries
It was a joy to know Frances at WMU and to also work with Nell. They left their mark on God´s Kingdom.
Bobbie Patterson
Work
June 28, 2021
Wayne & Nell, We were surprised when we saw Francis picture in the paper. We loved her,& Dr. Carter so much. Always enjoyed our visit with them when we came back to B"ham for a visit before we moved back. We loved all of you and great memories you two in Youth at Lakeside. Nell a dress you made for me and Wayne our youth trip one summer and we woke Wayne you up to get Danny Action off our floor so we could get some sleep. After two times you got the job done. Thanks, we have always loved all you and we are thinking of all and praying for all of you. May God bless you, give you comfort and peace is our prayer. We always had fun when with you parents Our love to all of you, We are thinking and prayer for all. Floyd Sue Brown
Floyd & Sue Brown
June 23, 2021
Dr. Carter presented to the students at Our Lady of Sorrows Catholic School for Ultimate Author Day a few years ago. In character as Rosie the Riveter, she was informative, charismatic, and humorous. Our students were "riveted" and so inspired by Dr. Carter's presentation!
I join so many others whose lives she touched by offering my sympathy and prayers for comfort and peace at this difficult time. Dr. Carter will truly live on in the hearts of a multitude of those blessed to know her.
Cindy Westbrook
Acquaintance
June 22, 2021
The Staff of the Doris Stanley Memorial Library wants to offer our deepest sympathy to the family of Dr. Carter. She visited the library several years ago and we enjoyed meeting her and listening to her talking about her days as a "Rosie". May God bless you through the difficult days ahead.
Anne Moore
Acquaintance
June 21, 2021
I enjoyed having Dr. Francis at Samford back in the early ‘70s. She was such a kind and sweet lady with great advice to newly married couples. Her son was also a roommate of my husband while we were there as students before we were married. Her wonderful influence on her children was very apparent by their good and strong Christian lives. May we always remember her and Dr. John as the good people they were.
Mary Exa Walker Crew
Student
June 16, 2021
To all the family,
My sincere sympathy and prayers to you as we remember your
dear mom, grandmother, great-grandmother and friend.
She was a wonderful Christian friend, professor, servant to
many people at home and abroad, achiever, writer and more.
She was an ordinary person who accomplished many extra-ordinary things in her life.
May God bless all of you.
Mary H. Hudson
MARY HUDSON
Friend
June 12, 2021
Offering my condolences in behalf of the Carter family and friends. May the peace of God comfort and strengthen you through this time of bereavement.
June 12, 2021
Showing 1 - 7 of 7 results