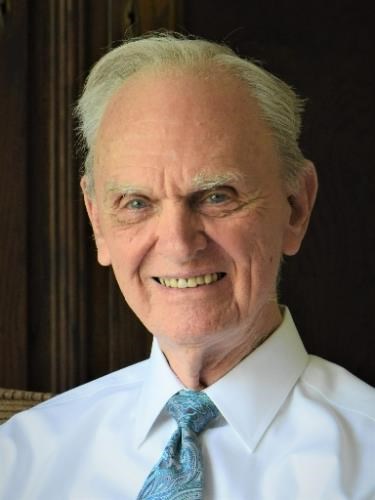 STRICKLAND, JAMES HARRIS, age 89, of Mountain Brook, died October 9, 2021. A native of Fairfield, he was the son of the late Olie Alga Strickland and Nelle Marie Seay Strickland. Jim was a graduate of Fairfield High School and, in 1953, of The University of Alabama, where he was president of the Pi Kappa Alpha fraternity and the Wesley Foundation, managing editor of The Crimson-White, and was elected to Omicron Delta Kappa and Jasons. He earned his MBA degree from The University of Alabama at Birmingham (UAB). He served two years of active duty in the U.S. Air Force and retired as a Lieutenant Colonel after 28 years in the Air Force Reserve. Jim worked as a reporter for the Birmingham Post-Herald early in his career, and was City Editor of The Montgomery Advertiser from 1957 to 1963. He was Manager of Public Relations for Southern Research Institute for 19 years, also serving for a time as Corporate Secretary. In 1982, he became Director of Public Affairs for Alabama By-Products Corporation and, after its 1985 merger, Director of Public Relations for Drummond Company, Inc., from which he retired in 1999. He was an Accredited Member of the Public Relations Society of America (PRSA) and a past president of its Alabama Chapter. For 57 years, Jim was a member of Canterbury United Methodist Church, where he was a member of the Church Council, a past chairman of the Administrative Board, and served in other leadership positions. He was a member of the Board of Trustees of the Birmingham Historical Society and had served on the Board of Trustees of the Birmingham Area Chamber of Commerce, the Board of Directors of United Way of Central Alabama, and on committees of the National Mining Association. Jim was preceded in death by his wife of 63 years, Julia Arbuthnot Strickland, and by his siblings, Olie A. Strickland, Jr. of Monahans, Texas, Ann S. White of Fairfield, and; Dorothy S. Hanson of Huntsville. He is survived by his two sons, Dr. James Harris Strickland, Jr., and his wife Susan, of Hoover, and Joseph Whitsitt Strickland, and his wife Emily, of Vestavia Hills; his grandchildren, James Harris Strickland III (and his wife Liz), Katherine Strickland Reynolds (and her husband Ian), Joseph Whitsitt Strickland, Jr. (and his wife Rebecca), Captain Samuel Marshall Strickland (USAF), and Roe Barron Strickland; and his great-grandson, Jack Marshall Reynolds. He was a beloved member of a very close extended family, including numerous nieces and nephews, and cousins. The family gratefully acknowledges again the loving and compassionate care provided to both of their parents by their caregivers at home during the most recent years. A memorial service will be held at Canterbury United Methodist Church, 350 Overbrook Road, Mountain Brook, at 2:00 p.m. on Thursday, October 14, 2021, followed by a time to greet the family afterwards. The church respectfully requests that masks be worn inside the church. For those unable to attend, Canterbury has made arrangements for the service to be viewed live via the following link: www.canterburyumc.org/funerallivestream. Memorials may be made to Canterbury United Methodist Church (350 Overbrook Road, Mountain Brook, AL 35213), to the United Way of Central Alabama, Inc. (P.O. Box 320189, Birmingham, AL 35232-0189), or to a favorite charity.
Published by The Birmingham News from Oct. 11 to Oct. 13, 2021.
To plant trees in memory, please visit the Sympathy Store.
MEMORIAL EVENTS
Oct
14
Memorial service
2:00p.m.
Canterbury United Methodist Church
350 Overbrook Road, Mountain Brook, AL
MAKE A DONATION
Please consider a donation as requested by the family.
MEMORIES & CONDOLENCES
Sponsored by The Family.
8 Entries
We are so very sorry, Joe.
Shelly and Jan Westerman
October 17, 2021
Jim was a gentleman and contributor to Drummond´s legacy and success. Please know that we value his contributions.
Bruce Webster
October 13, 2021
Joe & Jim, condolences to you and your families. What an accomplished man your Dad was! And a great father, no doubt. Rob McLaughlin
Rob McLaughlin
October 13, 2021
Joe I am so sorry for your loss. What a wonderful father. God bless you and your family
Steve Monk
October 12, 2021
So sad to realize that Jim is gone! He was a joy to work "for" and to work "with". So many wonderful memories of this dear gentleman. My prayers are with all the family.
Sarah Buchanan
October 12, 2021
I want the family to know how much I appreciate them and the opportunity I have had to be able to take care of Ms. Julia and Mr. Strickland. I learned to love both of them as if they were my own family. I have also learned to love the whole family and my heart breaks for each member as the loss was such a shock to everyone. As I called Mr. Strickland, Paw, he was such a blessing to me as I took care of him since the loss of Julia. He was fun to be around, loved his Alabama Football, and loved his sweets, especially the fruitcakes. I am going to miss him so much and would hope to be able to stay in contact with each of you. Know that my prayers are with each of you daily and pray for your health as well. Love to all of you.
Denise Johnson
Work
October 12, 2021
A beautiful obituary for a wonderful person Rest in peace
John H Jayne
October 12, 2021
A wonderful obituary for a wonderful man!
Anne Oliver
Family
October 11, 2021
Showing 1 - 8 of 8 results