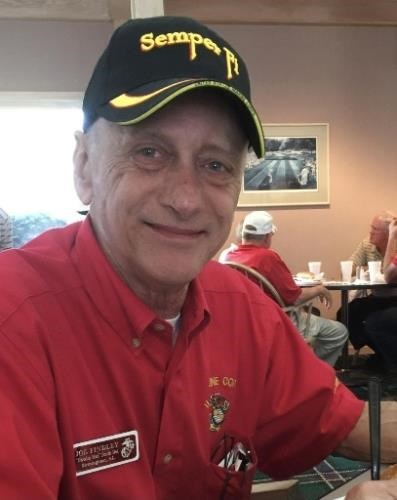 FUNERAL HOME
Jefferson Memorial Trussville
1591 Gadsden Highway
Trussville, AL
Joseph Lane Findley Jr., aged 72, passed away on November 18, 2021, surrounded by his loving family. He is preceded in death by his parents Joseph Lane Findley, Sr., and Shirley Vierra Goodwin; as well as his stepmother Corable Byrd Findley, sisters Dixie Goodwin and Donna Jo Findley DuBose, and nephew Michael Alton DuBose. He is survived by his wife Patti Hurst Findley and daughter Jessica Findley Valentin (Fernando). He is also survived by his siblings LaGina Contorno, Cynthia Wey, Peggy Walker, and Mark Goodwin; as well as his brother-in-law Alton DuBose, and a host of nieces, nephews, cousins, and other friends and family. He was born in Oakland, California, and grew up in Birmingham, Alabama, where he attended Ramsay High School. Mr. Findley was a proud member of the Howlin' "Mad" Smith Detachment of the Marine Corps League, the American Legion Post 171, and the Fleet Reserve Association. He bravely served our country as a United States Marine from 1967-1970, during which he served two tours in Vietnam. A visitation will be held at Jefferson Memorial in Trussville on Wednesday, November 24, 2021, from 10:00AM-11:00AM, with a funeral service commencing at 11:00AM. The service will continue at the Alabama National Cemetery in Montevallo at 1:15PM. In lieu of flowers, donations may be made to the HMS Detachment Scholarship Fund (ATTN: John Hilmer, 1529 4th St. N.W., Birmingham, AL 35215).

Published by The Birmingham News from Nov. 20 to Nov. 21, 2021.
To plant trees in memory, please visit the Sympathy Store.
MEMORIAL EVENTS
Nov
24
Visitation
10:00a.m. - 11:00a.m.
Jefferson Memorial Trussville
1591 Gadsden Highway, Trussville, AL
Nov
24
Funeral service
11:00a.m.
Jefferson Memorial Trussville
1591 Gadsden Highway, Trussville, AL
Nov
24
Service
1:15p.m.
Alabama National Cemetery
Montevallo, AL
Funeral services provided by:
Jefferson Memorial Trussville
MAKE A DONATION
MEMORIES & CONDOLENCES
Sponsored by The Family.
4 Entries
Patti, I am so sad for your loss and am thinking of you, Jessica, and all the family at this time.
Karen McCollister Lemley
November 24, 2021
My love and condolences to the family. Lane , Patty Findley and the DuBose families are in my prayers. God Bless You all.
Cheryl McFalls
Friend
November 24, 2021
My sympathies to the family Joe was a great Marine he will be missed by all he was my first commander in the Marine Corps League Semper Fi Joe
Phillip Williams
Other
November 23, 2021
From the Jones family rest in peace my friend may God bless your family, glad we where friend's you will be missed
Bill Jones
November 20, 2021
Showing 1 - 4 of 4 results