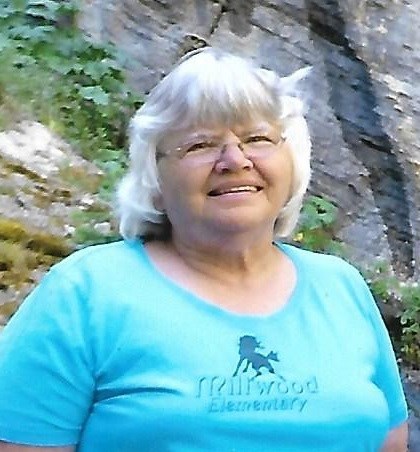 Carol was born Oct. 2, 1948, in Judson to Ed and Irma Sorge. She graduated from New Salem High School in 1966. She met the love of her life LeRoy that summer, and after a whirlwind romance, they married in December of that year. They immediately moved to Montana, which they always referred to as "God's Country." They honeymooned at White Wolf in Stanford, Montana and settled outside Augusta, where they spent the next 55 years. Carol was a homemaker and LeRoy's right hand 'man'; she enjoyed trapping and she particularly loved tearing out beaver dams with LeRoy. Before the children were born she also enjoyed hunting and snowmobiling. Carol and LeRoy were blessed with three wonderful children, Beverly, Keven and Misty and was very proud of her five grandchildren. After having children, Carol's focus was on her children's academics, sports and setting the best examples for her children. She taught them to cook and bake. All the children would gather in the kitchen to make Christmas goodies for friends and neighbors. Carol and LeRoy enjoyed the many special people who came into their lives over the years and many became "adopted family."

She was an active member of the Augusta Community Church Ladies Bible study, Montana's Trappers Association. She worked over the years as a waitress, house/hotel cleaner and babysitter. Her interests included family, gardening, card making, stamping, crocheting and setting puzzles. She was honored as Montana Trappers Rendezvous Queen and always helped out at registration desk and as bingo caller.

Carol genuinely enjoyed helping people; she was loyal, hardworking and a good listener. She would give anyone the shirt off her back if needed. She loved to listen to music with her family; there was always a record on the player growing up and she loved Mac Davis's "Oh Lord it's hard to be humble." Carol always loved a good practical joke, both given and received, and was known for "giving at least as good as she got."

Carol is survived by her loving husband of 55 years LeRoy; son Keven (Callie Kolste) of Fairfield; daughters Beverly Stierstorfer of Colorado Springs, Colorado and Misty (Brad) Hodges of Protem, Missouri; brothers Edward (Darlene) Sorge of Wheatland, Wyoming, Norman (Clair) Sorge of Bismarck and Ray (Lorraine) Sorge of Beulah and grandchildren Logan, Dylan, Gavin, Amanda and Ben. She is also survived by "adopted" children: Tom Bohl and family of Missouri, Sarah Peterson and family of Missouri, Wanda Holt of Fairfield, Montana; "adopted" grandchildren Ruth, Silas and Eli, and many, many other adopted children/grandchildren over the years (you know who you are!)

She was preceded in death by her parents Ed and Irma Sorge and sister Fay Cofield.

An open celebration of life will be held at a later date. In lieu of flowers, the family asks that donations be made for a scholarship fund to be set up in Carol's name. Condolences may be left online at www.gorderjensenfuneralhome.com.

Published by The Bismarck Tribune on Oct. 14, 2021.
To plant trees in memory, please visit the Sympathy Store.
MEMORIAL EVENTS
To offer your sympathy during this difficult time, you can now have memorial trees planted in a National Forest in memory of your loved one.
Funeral services provided by:
Gorder-Jensen Funeral Home
MAKE A DONATION
MEMORIES & CONDOLENCES
Sponsored by Gorder-Jensen Funeral Home.
2 Entries
LOVED HER BEAUTIFUL SMILE AND FUN LOVING PERSONALITY. SHE WAS A JEWEL. MAY GOD GRANT TO ALL HER FAMILY COMFORT AND PEACE.
KATHY AND HAROLD WITHERS
Family
October 14, 2021
Our thoughts and prayers are with all of you. Carol was such a caring and fun loving person. Even though we didn´t get to see each other often, she always kept in touch, especially with wonderful Christmas letters and through Facebook with great photos of travels and visits from family. She will be missed by all who knew her, but especially by her immediate family and the large extended family of cousins that she leaves behind.
Karen (Reuther) and Don Shulz
Family
October 14, 2021
Showing 1 - 2 of 2 results