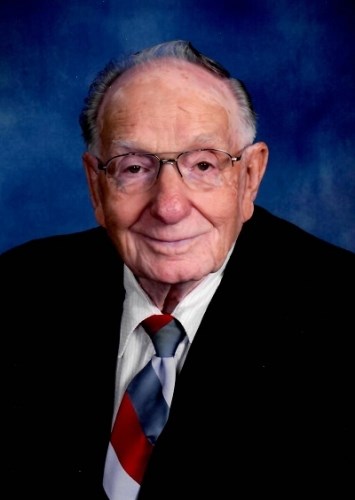 Edwin Rudolf Kruckenberg, 95, Mandan, passed away Thursday, Dec. 3, 2020 at Sanford Health in Bismarck. A private family service by invitation will be held.

Ed was born June 1, 1925 in Krem to Frederick and Katherine (Horning) Kruckenberg. He attended school through the eighth grade. Ed then joined the U.S. Army where he fought in the Korean War. He received the Korean Service Medal and Bronze Star in which he was deservedly so proud of.

In 1946 he married Hulda Hintz until the time of her passing in 1949. To this union their son, Arvid was born. During that time Ed was very proud of the four years he spent working to construct the Garrison Dam. He then went to work for Dan Dugan driving truck for over 28 years belonging to the Million Mile Club!

In 1954 he met Bernice Zoller and together they had a son Kevin and a daughter Kayleene. One month short of their 50th wedding anniversary Bernice passed away after a lengthy battle with cancer on Dec. 23, 2003.

Early when the family was growing up dad loved to camp, fish and deer hunt, even traveling several times to Canada to fish and Wyoming to deer hunt.

Mom and dad were very good dancers and Ed continued to dance up until the age of 95. They enjoyed traveling to South Dakota, Hazen or wherever they could find good old-time polka music. He also loved to play bingo at the AmVets, even winning the Big Pot in 2019!

Dad loved to talk. He always had time to visit with anybody. Many people said that dad never met a stranger.

Dad was preceded in death by his loving wife Bernice, his parents Fred and Katherine, sisters, Freida and Erna and brothers, Wilmer and Melvin.

In lieu of flowers the family request donation to the North Dakota Veteran's Cemetery.

To plant trees in memory, please visit our Sympathy Store.
Published by The Bismarck Tribune on Dec. 5, 2020.
MEMORIAL EVENTS
No memorial events are currently scheduled.
To offer your sympathy during this difficult time, you can now have memorial trees planted in a National Forest in memory of your loved one.
GUEST BOOK
8 Entries
Our deepest sympathies to Ed´s family . We so enjoyed our visits with him at the AmVets playing bingo . He was a one of kind person for sure .
Mike and Deone Lawlar
December 8, 2020
My deepest sympathy!Ed was a great coworker and friend.He taught me a lot while working at Dan Dugan.
David Liebig
December 6, 2020
Ed was a great guy. Very friendly and always a smile on his face. I would see him out and about either at bingo or dancing. I was happy to see him so active and not letting any grass grow under his feet!!!! He knew my Dad and would always ask me how he was doing. RIP Ed! I sincerely hope you are dancing up a storm in heaven!
Vicki Lippert
December 6, 2020
Ed was a great person when I lived next door to him with my parents Elmer & Ruby Huber. I remember a lot of fun my brother and I had with LaMar and Arvid & Kayleen and Kevin. He will be missed
Claudia Kruckenberg
December 5, 2020
My deepest sympathy! Your dad had a good life. I was happy that I got to dance with him last year (2019) cane in one hand and keeping up with the music. Always a smile and time to visit.
Cathy Trampe
December 5, 2020
I WORK AT BISMARCK TIRE & HAVE GOTTEN TO KNOW ED THERE.I TOLD HIM HE REMINDED ME OF MY DAD,NOT LOOKS,BUT HIS ACTIONS & THE WAY WE WOULD VISIT.WHAT A WONDERFUL MAN.HE WILL BE MISSED!!!!!!!!!!
AARON ZAHN
December 5, 2020
Mr. Kruckenberg family our the & prayers are with you all. He always had big smile whenever we would see him. He will be missed but will be dancing in heaven with his wife it anymore who loved to dance like he did. Rest in Peace.
Margie Charvat Muth
December 5, 2020
Our sincere sympathy to the family. Ed came to our dances at the Senior Center here in Hazen. We enjoyed visiting with him whenever we saw him.
Elmer & Carol Schiermeister
December 5, 2020