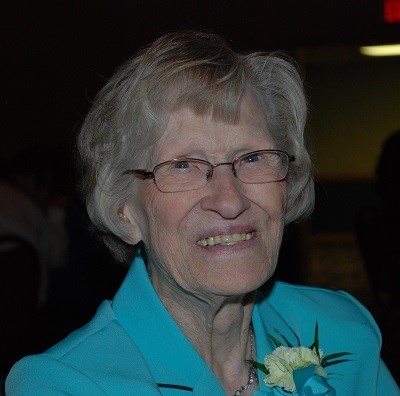 Visitation will be held one-hour prior at the church.

Burial will be held at St. Mary's Cemetery, Bismarck.

Eunice Jeanette Prang was born Sept. 7, 1925 in Stanton County, Nebraska, to Philip and Anna (Husmann) Prang. She graduated from Creston High School, Creston Nebraska. She earned a teacher's certificate from Nebraska State Teachers College, 1944, and began her teaching career. In 1970, Eunice graduated with a bachelor of science in elementary education from Dickinson State College. At the age of 60, she obtained her license as a massage therapist and worked with her son-in-law, Herman Kesterke.

Eunice married Rev. Walter Klempel on June 16, 1947 and they had five children. She was actively involved in the Baptist churches served by Walter in Nebraska and South Dakota.

In 1950 they were living in Beatrice, Nebraska, where Walter was pastor at the West Side Baptist Church. At 7:28 pm, March 1, 1950, the church furnace exploded. Choir practice was to have begun at 7:15 p.m. that evening, but miraculously, Walter, Eunice, their baby daughter Marilyn, and the entire choir were late that evening and no one was in the church. "The Night the Choir Was Late" was featured in Life magazine, Reader's Digest, That's Incredible, and other news stories.

Eunice and Walter demonstrated commitment to Christian ministry throughout their lives. Eunice taught at Shiloh Christian School in Bismarck. The ministry of Crystal Springs Baptist Youth Camp held a special place in their hearts.

In 1990 Walter and Eunice moved to Bismarck to be closer to their children and grandchildren. In retirement Eunice kept busy with grandchildren, quilting, crocheting, Bible study and volunteering. Walter passed away Oct. 10, 1997.

Eunice moved to Perham, Minnesota, to live with her daughter in 2016. At the time of her passing she was receiving tender and thoughtful care from Elk Ridge Assisted Living facility and Hospice of the Red River Valley.

She was preceded in death by her parents; husband, Walter; two brothers and their wives, Kenneth and Evelyn Prang, Milton and Vernie Prang; one sister and her husband, Marion and Hilmer Settje; and son-in-law, James Lindholm.