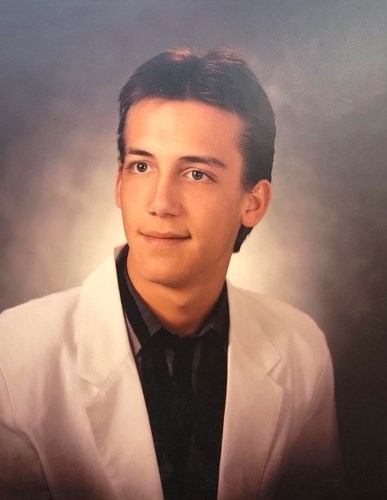 He grew up in Bismarck where he attended and played hockey for Bismarck High School. He went on to be voted Homecoming King and later graduated in 1987. He was known for his unique charisma and sense of humor. He had a way of making everyone around him smile and feel welcomed and loved. Mark was a hardworking, loving, devoted father and grandfather. The early years of his life were spent raising his sons in Fargo, where he worked as a foreman plumber.

He later returned to Bismarck where he continued to work and dedicated his remaining time to being a father, son, coach, fan, and cheerleader. He never failed to make his presence known at every sporting event of the boys'. Mark was a lifelong Dallas Cowboys fanatic. Watching games and playing backyard sports with his boys were his most cherished moments. The most important thing in the world to him was his three sons but becoming a "Papa" was his greatest accomplishment. Mark greatly enjoyed spending time with his granddaughters and watching them grow. He was extremely proud of his family and was never shy to express his love for them. He will be greatly missed by all who knew him. We love you always. AR AR AR.

Mark was preceded in death by his father, Wendelin and brothers Tony and Calvin.

He is survived by his mother, Anna; his three sons, Zachary (Kylee), Tanner and Jesse (Jordyn) and his three granddaughters, Taeya, Alayna and Maeya. He is also survived by his brother, Steve and four sisters, Linda, Karen, Louis and Lucille.