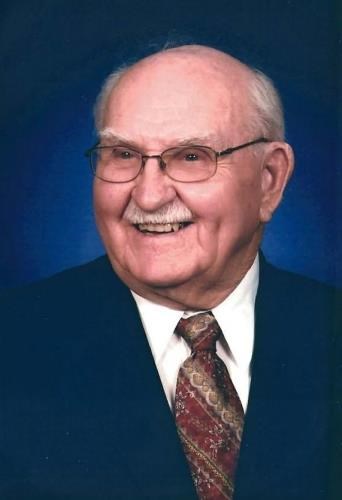 Public visitation will be held from 5 p.m. to 8 p.m. Thursday at Eastgate Funeral Service, 2302 E Divide Ave, Bismarck. All are invited to celebrate Walter's life at the visitation.

Burial will be held at the North Dakota Veterans Cemetery, Mandan.

Walter Junkert was born to George and Louisa (Luithle) Junkert on Jan. 26, 1929. He was raised on a family farm located near Antelope. Employment came early in Walter's life. The family farm was the job site, his parents were his first supervisors, and the pay was a roof over his head, clothes on his back, food in his belly, and a very clear understanding of hard work – a trait he passed on to his four sons. Walter attended a rural grade school near the family farm and graduated from Hebron High School in 1947.

In October 1950, Walter was drafted to serve in the United States Army and was stationed in Germany. He left active duty Dec. 24, 1952. In July 1953, Walter continued working on the Northern Pacific Railroad as a brakeman at Dickinson. Walter than moved to Mandan and worked as a brakeman and conductor on freight and passenger service trains. During the 1970s, Walter served as a conductor for the Amtrak passenger service.

Walter married the love of his life, Jane Wetzel, in June 1957. They lived in Mandan until 2003 before moving to Bismarck. Walter was never afraid of hard work, but always had time to help his family and friends. He lived his faith by trusting his loving Lord and Savior, Jesus Christ, to meet all his and his family needs.

In June 1993, Walter retired from the Burlington Northern Railroad after serving more than 40 years. He quickly adopted the saying "Goodbye tension, hello pension!"

Walter loved buying, selling, and working on cars, carpentry, singing in a gospel quartet, gospel music, and watching Wheel of Fortune. Walter was a Ford man – he loved the Blue Oval. Walter also loved to cruise with Jane in their Ford Mustang convertible with the top down and the windows up. Jane said she will miss his "magic hands" that could fix anything. Walter enjoyed helping construct the Capital Christian Center in Bismarck.

Walter is survived by his loving wife of 64 years, Jane, four sons, Curtis (Paula Hardin-Junkert) Junkert, Texas, and Curtis' sons Shane and Ryan, and Ryan's sons Liam and Elijah; Wayne Junkert, Jamestown, and his children Joseph and Genevieve, and Joseph's son Killian; Mike Junkert, Bismarck; and Ken (Dawn Wanner-Junkert) Junkert, Bismarck, and their children Chantel and Abigail; and many nephews, nieces, and friends.

Walter was preceded in death by his parents, and brothers Edwin and Rueben, and sister Esther.