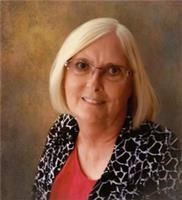 Cathy was born June 20, 1953 in Borger to Eugene Penfold and Dorothy Ball Penfold. She has lived in Borger, and the area, for her whole lifetime. She married Jerry Keith Hunt January 21, 1977 in Pampa and worked as the manager of Accent Travel for the past twenty-three years. She was a member of Grace Church and a member of DAR, Hutchinson County Genealogical Society, she volunteered for the Fritch EMS and was a member of the Rattler Alumni Association after graduating from Stinnett High School in 1971. Cathy loved to travel, camp, fish, do genealogy but her favorite thing in life was spending time with her kids, grandkids and great-grandkids. Her latest endeavor was being the coordinator for the Wreaths Across America, Hutchinson County branch.

She was preceded in death by her father Eugene Penfold, her sister Louise Penfold and her father and mother in law Clovis and Virgie Hunt.

Cathy is survived by her husband of forty-four years Jerry, her mother Dorothy Penfold of Stinnett, her daughters Amanda Wright and her husband Bobby of Borger, Kandy and Carrie Hunt of Moore, OK and Taffy Eubanks of Florida and her grandkids Christopher Wright, Colton Hunt, Kailey Brown and her husband Anthony and J. T. Eubanks and his wife Alicia, her great-grandkids A. J., Aubreeana, Deacon, Jaxon and Everleigh, her brothers Bobby Penfold and his wife Wanda of Lawrence, KS, Ronald Briley and his wife Judy of Yuma, AZ, Larry Penfold and his wife Barbara of Stinnett, her brothers in law Danny Hunt of Amarillo and Bobby Hunt of Ohio and her sister Sharon Vandergriff of Oklahoma City.