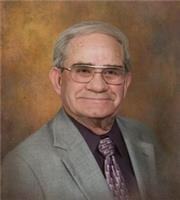 Bro. Gillmore was born June 18, 1934 in Quitaque, TX to Gus Lucian Gillmore and Opal Vera Allen Gillmore. He served his country in the Navy Reserve and married Beverly Ford on August 14, 1954 in Roswell, NM. Jimmy began his call to the ministry by preaching faithfully at Faith City Mission in Amarillo Texas and by filling in as a substitute preacher around the community. Riverview Baptist Church was the first church he pastored and many thought he would not be there long as pastors came and went. He faithfully preached the gospel of Jesus for more than 54 years and was still preaching up until his death.
When he came to Riverview, people asked if he wanted to be called Reverend or Pastor. He said, "just call me Preacher", and they still do today.

Preacher was the catalyst behind the creation of Camp Masterson, which is owned and operated by Riverview Baptist Church. The Bivens family owned this property, which originally consisted of an old schoolhouse and a few acres of land. They agreed to give it to the church as long as it was used as a nonprofit and to help children. The camp continues to thrive today and has grown significantly in structures and acreage. The camp motto is, "Provided by the Master, for His Son".

Many men play golf or fish or find a hobby as a way to relieve stress and find refreshment. Preacher was never big on hobbies or games except maybe a competitive game of Monopoly in his earlier days where he would buy up the best properties, develop his motels and take everyone's money. When Preacher needed a break or some time alone, you would find him on a road grader plowing a new road or on a backhoe digging a hole or maybe on a tractor mowing the grass. He loved equipment and playing in the dirt. Colorado was also a favorite place to take his family for a time away in the camper.

There was a time during Preacher's ministry when many residents in the community were being displaced and had to move their homes and lives because of the danger of being too close to Phillips Petroleum Company and some of its assets. Riverview Baptist Church was also asked to move during this time. Preacher had the vision and courage to develop a community called Beverly Hills, where the church was relocated along with many residents. Preacher named this community after his beloved wife, Beverly and all of the streets were named after his children and grandchildren because he dearly loved his family. He taught his family to trust wholeheartedly, love unconditionally, give sacrificially, pray fervently and put Jesus before everything else. He was the best husband, dad, granddad and great granddad a family could hope for. And Preacher loved his church more than anyone could ever know.

He was preceded in death by his parents, his two great-grandsons Thatcher Caleb Paul and Caden Joshua Paul, his three sisters and three brothers.

His service will be live streamed on the church facebook page at Riverview Baptist Church Borger, it will also be recorded and replayed on this website.
Published by Borger News Herald from Aug. 20 to Aug. 21, 2021.
To plant trees in memory, please visit the Sympathy Store.
MEMORIAL EVENTS
To offer your sympathy during this difficult time, you can now have memorial trees planted in a National Forest in memory of your loved one.
Funeral services provided by:
Minton-Chatwell Funeral Directors
MAKE A DONATION
MEMORIES & CONDOLENCES
Sponsored by Minton-Chatwell Funeral Directors.
0 Entries
Be the first to post a memory or condolences.