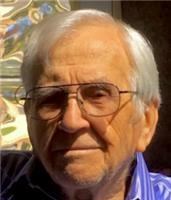 John was born in Anadarko, Oklahoma on September 29, 1927 to Ralph Ezra Bayless and Leona Boelyn McClarty. After graduating from Borger High School, John joined the Navy where he served until he was honorably discharged due to rheumatic fever.

To know John was to love him. As a resident of Borger, Texas for over 90 years, he poured his heart and soul into his wife, four children, five grandchildren, two great-grandchildren, and community. If you didn't recognize his booming voice, famous hugs and tough pats on the back while walking through the World's Largest Fish Fry, while he was ringing the bell at Christmas for the Salvation Army, or simply walking through United, you'd surely recognize "The Commissioner" mobile in the parking lot of almost every community event.

John enjoyed his Friday lunch group at Lorraine's, playing golf, learning how to use the computer to email his grandchildren, and a good ol' fashion bean burrito. However, the one thing he enjoyed most in this world was the company of his wife of 72 years.

To say John was an incredible father and Pappaw would be the world's largest understatement. From getting his grandchildren their first library card, taking them to the beach for the first time, letting them sleep in his lap during the symphony, or purposefully saying the wrong answer to a question to poke fun at his lack of hearing, he'd do it all just to see a smile on a loved one's face. He was a role model for all and spent most of his time teaching his family how to love the Lord.

John spent 16 years as the Hutchinson County Commissioner, was a Deacon for 25 years at the First Baptist Church of Borger, a member of the Borger Lions Club and Borger Chamber of Commerce, the President and Lifetime Member of the Salvation Army, and served as President of the Borger ISD School Board for eight years, where he served an extra term to have the privilege of handing his daughter Leanne her high school diploma.

Published by Borger News Herald from Aug. 28 to Aug. 29, 2021.
To plant trees in memory, please visit the Sympathy Store.
MEMORIAL EVENTS
To offer your sympathy during this difficult time, you can now have memorial trees planted in a National Forest in memory of your loved one.
Funeral services provided by:
BROOKS FUNERAL DIRECTORS (CANYON) - CANYON
MAKE A DONATION
MEMORIES & CONDOLENCES
Sponsored by BROOKS FUNERAL DIRECTORS (CANYON) - CANYON.
1 Entry
too many memories to think of one.....our dad also had a connection to your mom in McLean. your dad and of course your mom are two of those adult figures pivotal in all our memories of Borger.....God bless all of you.
Curt, Blair and Chip Biggers
Friend
September 23, 2021
Showing 1 - 1 of 1 results