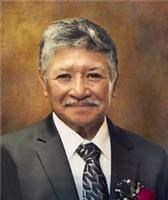 FUNERAL HOME
Minton-Chatwell Funeral Directors
314 S Hedgecoke St
Borger, TX
Jorge Martinez-Barragan went to eternal rest at the age of 69. He resided in Borger, Texas for 45 years. Jorge Barragan will be lovingly remembered. He was married to Sabina Barragan for 42 years. He had been retired for four years and was known as a hardworking and caring man who cared for his family. He loved doing construction and welding. He had several gifts and talents. His favorites were spending time with family, fishing, building and watching his favorite soccer team Las Chivas. Jorge was always willing to go the extra mile in helping those in need. Anyone who had the blessing to have met him knew he had a good heart. Jorge volunteered for years as an usher at St. John's Catholic Church. He was also a member of the Knights of Columbus.

He is preceded in death by his parents, Jesus and Isabel; brother, Ignacio Barragan; and an infant sister.

Mass of Christian Burial will be held at 11 am on Wednesday, November 3, 2021 at St. John Catholic Church with Fr. Shane Wieck, celebrant. Burial will follow in Westlawn Memorial Park under the direction of Minton Chatwell Funeral Directors of Borger. The Rosary will be recited beginning at 5 pm on Tuesday, November 2, 2021 in the Minton Memorial Chapel.
Published by Borger News Herald from Nov. 6 to Nov. 7, 2021.
To plant trees in memory, please visit the Sympathy Store.
MEMORIAL EVENTS
To offer your sympathy during this difficult time, you can now have memorial trees planted in a National Forest in memory of your loved one.
Funeral services provided by:
Minton-Chatwell Funeral Directors
MAKE A DONATION
MEMORIES & CONDOLENCES
Sponsored by Minton-Chatwell Funeral Directors.
0 Entries
Be the first to post a memory or condolences.