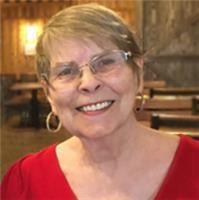 BORN
1942
DIED
2021
FUNERAL HOME
Brown Funeral Directors - Chapel of the Fountains
206 West First
Borger, TX
Sue Lynn Alford Trumbly of Fritch, Texas passed away in Edinburg, Texas on her 79th birthday, Monday, October 4, 2021. She was born Sunday, October 4, 1942 in Bartlesville, Oklahoma to Clifford and Frances (Cooper) Alford. She was the oldest of four children.
Sue graduated from Phillips High School in 1961 making her a proud Blackhawk. Sue and Joe Bob Trumbly were married on July 2, 1961 in Borger, Texas. Joe Bob joined the military shortly after their marriage and while living in California their two daughters, Cherl and Kim, were born. In 1966 they moved back home to Phillips, Texas to raise their family.
Sue was a loving wife, mother, and homemaker. She always sacrificed her needs for the good of the family. Sue was a member of the Phillips Ladies Golf Association and served on the board where she held several positions over the years. Sue bowled in two leagues at Cedar Lanes Bowling Alley. She enjoyed being the organist for the Order of the Eastern Star Chapter #811 of Borger until they merged with the Eastern Star Chapter #653 of Dumas where she remained a member until her death. Sue was very active in the Borger Elks Lodge #1581 Elkettes for many years. She held several offices and enjoyed decorating the lodge for various events. The last several years, the highlight of her week was to go to the Elks Lodge and play cards every Friday night.
Sue was an accomplished pianist, an excellent seamstress, and an avid reader. She loved playing board games and card games of any kind. She could not be beat at Trivial Pursuit, her knowledge was vast. She was an Atlanta Braves fan and enjoyed watching Dale Murphy. She was also a Phil Mickelson fan and watched all the PGA tournaments on television. She loved keeping up with her friends and family on FaceBook and playing "Words with Friends" with anyone who would play.
Sue was preceded in death by her husband of 53 years, Joe Bob Trumbly; her parents, Clifford and Frances Alford; one sister, Janice Seay; and one son-in-law, Randy Prince.
Sue is survived by her two daughters, Cherl Prince of Midland, Texas and Kim Swink and husband David of Perryton, Texas; four grandchildren: Colten Peak and wife Marinda of Littleton, Colorado, Kayla (Swink) Bigham and husband Matt of Perryton, Texas, Elise (Peak) Hurst and husband Josh of Lubbock, Texas, and Daniel Swink of Perryton, Texas; seven great-grandchildren: Conner Coile, Shepherd Hurst, Judah Hurst, Graysten Peak, River Hurst, August Hurst, and Everlyn Peak; two step-great- grandchildren: Ellis Bigham and Brody Bigham; one brother, Dallas Alford and wife Sandy of Amarillo, Texas; one sister, Stacy Paulette (Alford) Mitchell and husband Wayne of Borger, Texas; one brother-in-law Willie Seay of Borger, Texas, along with numerous nieces and nephews.
Visitation will be Friday, October 8th at Brown's Chapel of the Fountains from 6:00 PM - 7:30 PM.
Services will be held Saturday, October 9th at 10:00 AM at Brown's Chapel of the Fountains in Borger. Burial will follow at Westlawn Cemetery, Borger.
Memorials may be made to Fritch Meals on Wheels, PO Box 366, Fritch, Texas 79036, Borger Elks Lodge #1581, PO Box 1577, Borger, Texas 79007 or your favorite charity.