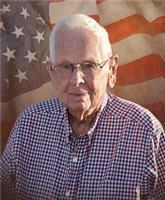 Being a child of the depression, V.E. moved to Ada to live with his older brother, Dude and his wife. He went to work at an electric motor shop where he learned to rewind motors.

At the age of 17, V.E got his mother to sign a release so he could join the Navy and serve in WWII. He was discharged from the Navy in May of 1945 in San Diego, California. Upon discharge he moved back to Ada, Oklahoma, where he met the love of his life, Betty Lou Grisham. On June 15, 1946, they were married in Ada.

In 1948, they moved to Borger, Texas. He began working at the Electric Motor Exchange. Then started a 38 year career with Phillips Petroleum Company, Philblack Plant. He became an electrician and retired as Electrical Supervisor.

V. E. loved to hunt for good deals, especially at garage sales and auctions. He loved to work on old tractors, he probably owned almost one of every kind of tractor that was made at one time or another. His favorites were Fords. He also loved Lincoln welders.

He also loved to work on cars (except for his own) and a huge collection of cars came and went as he would fix them and then sell them.

Guys were always bringing something by the shop to see if V. E. could fix it. And, of course, he could!

He loved his kids, grandkids and great grand kids. Always letting them ride the latest tractor up and down the alley behind his house. He was always quick to help on any project that any of us might have going. He also put many of them to work, painting, mowing, roofing and anything else that needed to be done to his rent houses. He spent hours and hours at their sporting events, where he was an anxious fan! Verlie was a member of the Unity Masonic Lodge.

He was preceded in death by his parents, his wife Betty, his son Gary, his daughter Donna Mesneak, his son-in-law Jimmy Mesneak, seven brothers and one sister and his daughter-in-law Edwina Deaton.

Casket bearers will be Alan Mesneak, Aaron Mesneak, Ben Deaton, Drew Deaton, Andrew Dixon, Zach Mesneak and Steven Fullbright.
Published by Borger News Herald from Aug. 28 to Aug. 29, 2021.
To plant trees in memory, please visit the Sympathy Store.
MEMORIAL EVENTS
Aug
30
Funeral service
2:00p.m.
First Baptist Church
TX
Funeral services provided by:
Minton-Chatwell Funeral Directors
MAKE A DONATION
MEMORIES & CONDOLENCES
Sponsored by Minton-Chatwell Funeral Directors.
2 Entries
Verlie was one of my best friends. He was always ready to help anyone in need. And especially going to auctions, we made many trips to big or small auctions across the Panhandle. Always buying more than we intended, but were happy with whatever we splurged on. Verlie could fix anything like new. Autos, tractors, lawnmowers, welders, anything electrical or mechanical. We were both members of the Masonic Order and tried to live up to it's obligations. I will miss my wonderful friend forever.
John Cambron
August 31, 2021
Such a nice guy. You will be dearly missed. Glad i knew you Verlie.
Joe walker
Friend
August 25, 2021
Showing 1 - 2 of 2 results