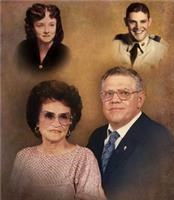 He was born to Odis and Mildred Nicholas on July 2, 1930, in Caviness, Lamar County, Texas.

Mr. Nicholas worked as a welder and was a member of the United Association of Journeymen and Apprentices of the Plumbing and Pipe Fitting Industry of the United States and Canada. He was a Master Mason of Unity No. 1242, Borger, Texas.

Mr. Nicholas proudly served his country in the United States Army and was stationed in Korea during the Korean Conflict.

He is preceded in death by his parents; wife; and sisters, Sonja Assiter, Patsy Brown; and brother, Cyburn Nicholas.

She was born to Winston and Sadie Young on October 28, 1929, in Goodlett, Hardeman County, Texas.

Bobbie was a gifted seamstress and beautician in Borger, Texas.

She is preceded in death by her parents; sisters, Norma Pettit, Mary Brown; brothers, Winston Young, Jr., and Alton Young.

They resided in Fritch, Texas.

They are survived by nieces and nephews, Vance, Angie, Kaylee and Victor Brown all of Borger, Buster and Percilla (Nicholas) Newberry of Fritch, Chief, Sharon (Nicholas) and Chase Prock of Pampa, Teresa (Nicholas) Bodey of Borger, Taylor Bodey of Amarillo, Daniel ,Kim, and Halle Holjes of Fritch, Preston, Danna and Bandee Green of Duncan, Oklahoma, Kimmie Bell and Jaymee Bell of Edmond, Oklahoma, Paul, and Trisha Newberry of Amarillo, Davin and Daxton Holjes of Amarillo, Tristan McDaniel of Austin; sister-in-law, Martha Nicholas of Fritch; and caregiver, Kathy Tyre of Borger.

The family will receive friends from 5-7 pm on Wednesday, September 8, 2021 at Minton Chatwell Funeral Directors of Fritch, Texas. Graveside services will be held at 10:00 am on Thursday, September 9, 2021 at Westlawn Memorial Park.
Published by Borger News Herald from Sep. 23 to Sep. 24, 2021.
To plant trees in memory, please visit the Sympathy Store.
MEMORIAL EVENTS
To offer your sympathy during this difficult time, you can now have memorial trees planted in a National Forest in memory of your loved one.
Funeral services provided by:
Minton-Chatwell Funeral Directors
MAKE A DONATION
MEMORIES & CONDOLENCES
Sponsored by Minton-Chatwell Funeral Directors.
0 Entries
Be the first to post a memory or condolences.