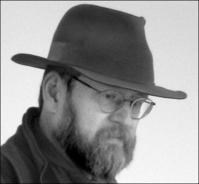 FUNERAL HOME
Nichols Funeral Home, Inc.
187 Middlesex Avenue
Wilmington, MA
Hanson, Caleb C. Age 59, died peacefully on Thursday, March 12, 2015, at his home in Wilmington, MA. Much loved husband of Carol (Kane) Hanson, beloved and loving father of David Hanson and Bethany Hanson of Wilmington, devoted son of Dorothea (Reynolds) and the late Harlan "Harpo" Hanson of Williamstown, MA, he is also survived by his brother John Hanson and his wife Elizabeth of Cambridge, MA, his brother Charles Hanson and his wife Katherine of Redwood City, CA, his sister Dorothea Hanson of The Hague, Netherlands, his sister-in-law Susan Kane-Ashworth of Richmond, VA, and numerous nieces and nephews. Born in Boston, he grew up in Williamstown and was graduated from Mt. Greylock Regional High School. He received his undergraduate degree in Scandinavian languages and literature from Harvard and a graduate degree in library science from Simmons. He worked as a librarian at Wellesley College and as a writer, copy editor, and general editor at Lotus Development/IBM in Cambridge and North Reading, at Curriculum Associates in Billerica, and at Tufts Health Plan - Network Health in Medford. He was always interested in the history of this and other countries and enjoyed a variety of travel opportunities. His family had spent a year in Alsace when he was a boy and he was fluent in French. During his high school years, they took another year abroad to England where he attended Magdalen College School at Oxford. His study and appreciation of Icelandic sagas led to more than one journey to that far land. He was also active for many years in a medieval recreation society where he was well known for his scholarship, for his story-telling, and for his performances in early and Shakespearean theater. He loved books, maps, games, and the company of friends. In all things, he cared strongly for the power of words to transmit knowledge and enjoyment, and his greatest pleasure was where the two could be combined. His was a generous, cheerful, and gentle spirit, and he will be much missed. A memorial service will be held at a later date. Please send requests for notice to [email protected] The information will also be posted when known at www.nicholsfuneralhome.com, where condolences and remembrances can also be left. Memorial donations may be made to the American Brain Tumor Association (www.abta.org) or to the Unitarian Universalist Assoc. (www.uua.org). Nichols Funeral Home, Inc. 978-658-4744 www.nicholsfuneralhome.com

Published by Boston Globe from Mar. 13 to Mar. 14, 2015.
To plant trees in memory, please visit the Sympathy Store.
MEMORIAL EVENTS
To offer your sympathy during this difficult time, you can now have memorial trees planted in a National Forest in memory of your loved one.
Funeral services provided by:
Nichols Funeral Home, Inc.
MAKE A DONATION
MEMORIES & CONDOLENCES
34 Entries
Very sad to come across this. He was my neighbor in Williamstown, Massachusetts, and fellow classmate at Mt.Greylock Regional High School, where he was the valedictorian (the Latin portions of his speech were lost on me, I'm afraid). Quoted Tolkein for his yearbook entry, as I remember it (long before the films, of course), alongside a picture of him standing with a walking stick. I think. It's been a long time.

May the wind under your wings bear you where the sun sails and the moon walks. RIP, Caleb.
Mary Ellen (Epperly) Feinberg
June 22, 2016
Harlansson herds us / To wood heat's welcome
Skald carries stories / Conjures history's heroes

By Carolus River / Has hung up his harp

Harlansson tongue-tales / Live long in word-fame.
Tell us a saga, Uncle Kali!
Ki-lin
July 20, 2015
It has been far too many years since I last saw him, but, when I think of my home away from home in Carolingia, Kale always stood forth as the avatar of the best and brightest in the barony of my (relative) youth: as seneschal, as thespian and --- perhaps above all --- as the Latinist and teacher at Carolingian University that only another Latinist could fully appreciate it. My world is a bit poorer today knowing that I will never see him tread the boards or get to exchange Latin puns with him again. Alisoun MacCoul of Elphane.
E. L. Wimett
March 17, 2015
May the pain fade in time, and the lovely memories take their place. My sincere condolences. Mistress Keridwen Gwennmarch
March 17, 2015
Kali (Caleb) will be missed; though I have not seen him for long years, I have many fond memories of him from my early years in the SCA in Carolingia. He was always a gentle kind soul. My condolences to his family. Kate Waterous
March 17, 2015
We are so very sorry to hear of Caleb's passing. We will both miss him.
Johanna and Aquel
March 16, 2015
The world is Indisputably a poorer place without Caleb in it. The comfort may well lie in the reality that he will remain with us all as long as his stories are retold. May his memory ever be a blessing to Carol, David, and Bethany, to Caleb's family, and to all who mourn him.
Mel O'Leary
March 16, 2015
"Tell us a story..." And he always would, taking us on adventures to distant times and places. His warmth, wisdom, and humor was often a comfort to me and his many other friends. It was a joy to perform with him; he was so talented, and he could do pretty much everything. He knew so much, and was always willing to share it in the nicest way. He was one of those rare people you could count on to know the answers back in the old days before we carried internet libraries in our pockets. I'm so sorry for Carol and his family; his was a particularly bright light, and he'll be sorely missed.
Pamela Dritt
March 15, 2015
Oh how sad... Caleb was a year ahead of me at Mt. Greylock, and I as such I only knew him tangentially. Still, I am beyond saddened to learn of his demise. He was so young!

~Tommy Marshall
March 15, 2015
I'm sure lfwine was there to welcome and enjoy Kali/Caleb's arrival, and together they'll make things more interesting on the other side. Here, we'll just remember the good times. Arastorm
Virginia Fair Richards-Taylor
March 15, 2015
It seems somehow impossible he's gone. I read somewhere, the price of loving much is grieving much. I'm so sorry. My thoughts and prayers are always with you all. Love, sue
susan
March 15, 2015
Another Thegn 1A has left us. I am saddened beyond measure at the loss of this good, kind, funny, and gentle man. His wit and humor will be greatly missed. Peace and comfort to all who mourn his passing, especially Carol, David, and Bethany.
Arianna of Wynthrope
March 15, 2015
Carol and Family: I am sorry for your loss. Thinking of you.
Cathleen Kane
March 15, 2015
Carol and Family:

I am so sorry for your loss. Thinking of you.
Cathleen Kane
March 15, 2015
I'm so sorry for your loss, Caro;. My prayers are with you. Love, Aunt Nancy
Nancy Kane
March 15, 2015
Kali made my world a better place and I know I am not the only one. He is missed. -Constance de Saint Denis
anna bradley
March 15, 2015
The Eastkingdom will sparkle a bit less without you among us. Much love to your family and friends who will feel the loss much more deeply. I hope your Next adventure is full of wonder and happiness.
Till we meet again,
Baroness Astrid Sigrun Ulfkelsdottir the Valkyrie of Malagentia
J D
March 15, 2015
C'est avec grande peine que nous venons d'apprendre le dcs de Caleb Hanson..
Nous nous assosions votre douleur.
Famille Bernard Ast, Blotzheim, Alsace France
March 15, 2015
So sad to hear of the passing of my cousin Caleb. My heart goes out to Caleb's wife Carol and their children , my Aunt Theesie and cousins, John, Charles, & Dolly and their loved ones who lost a special soul too early in life. May you all find peace in the wonderful memories and legacy he leaves behind.
Jane Coble
March 14, 2015
The friendship, humor and wise counsel Caleb so freely gave to Ianthe and I -- as he did to so many others -- will never be forgotten. My brother on the stage so many years ago, you now ride the rainbow road beyond all rede -- Farewell.
Fernando Salazar
March 14, 2015
Barbara and I were very sorry to hear of Caleb's passing and hope that his memory is a blessing to his family.
Ben Rooks
March 14, 2015
I am saddened by this news. A great friend in high school. My heart how's out to Caleb's family.
Liz alton
March 14, 2015
My deepest condolences to Caleb's family. I too, went to high school with Caleb, in his graduating class. Very sad to hear of his passing.
Deborah Rosenburg-Gamari
March 14, 2015
John- I'm so sorry for your loss. I didn't know your brother well, but I do remember performing in the play, "Childhood" with him, as well as "Hello Dolly". He had a great sense of humor.
Lynn Camacho
March 14, 2015
John and Elizabeth..I am sorry to hear about Caleb's passing and your loss of your brother. Know we are thinking of you all. Dori and Hutch
March 14, 2015
I will share that Caleb bravely sat in the passenger's seat the first time I drove through snow (At the Carolingian University where a snow emergency closed it down) I think of his steady confidence in me almost every time i drive in the snow. My condolences and hugs to you all. Love, Susan Christiano (Guendalina)
Susan Christiano
March 14, 2015
He made the world better
Tom Spisak
March 14, 2015
John, you and your family have my heartfelt sympathy; through your many memories may you find peace and comfort.
Sue Luczynski
March 14, 2015
Startled reading about Caleb's passing. My son David was in school with him and they enjoyed each others company. It's a difficult process loosing a child, Dorothy. My prayers are with you and Caleb's family.
March 14, 2015
My deepest condolences to the entire family. Caleb was my childhood classmate and friend. He was an extraordinary gentleman with acceptional gifts.
Alan George
March 14, 2015
No memories to share, but deepest condolences and love to his wonderful brother John, from Lisa Grunwald
March 14, 2015
Sending you all my deepest sympathy for your loss. Reading about him made me realize how gifted he was, and how your family and experiences of travel helped form this special man. You are in my thoughts and prayers. Kristi Robinson Marcus
kristi marcus
March 14, 2015
Caleb told of a summer's day in Williamstown. MA. He and his father, another tall bear of a man, bearded, were haying in a field. Up struggled a young slender man carrying an Encyclopedia Brittanica sales kit. Out of breath, hot and perspiring, the young drummer began his pitch. Father Hanson raised a hand;
"Young man, save your breath. We don't hold with book learnin' in these parts."
Chastened, the young man fled down the hill.
Father Hanson was a professor of English at Williams College.
John Page
March 14, 2015
I am sad that I hadn't seen Caleb for quite some time, and now have lost any chance of doing so. I feel an urge to curl up with an Icelandic Saga or story so that I can hear his voice again, at least inside my head. My favorite of his stories remains that of Audun and the Bear.
Harald Longfellow
March 14, 2015
Showing 1 - 34 of 34 results