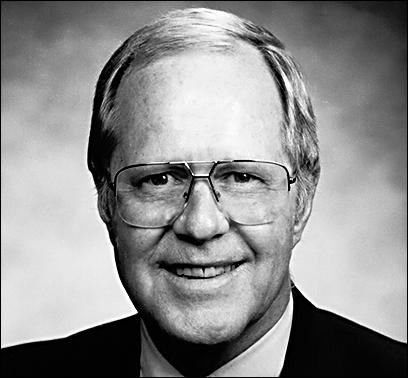 Cushing III Age 81, passed away peacefully at his home on Monday, August 4th, 2014 surrounded by his loving family. He was a devoted husband of 55 years to the late Carol Ballou Ladd and leaves his fianc?e Elaine Burkley of Sudbury, MA. He is survived by his children, Melissa Northrup of Boxborough, MA, Charles C. Ladd IV and his wife Marcia of Mountain Top, PA, Ruth McGraw and her husband James of Essex, MA, Matthew Ladd and his wife Annette of Little Compton, RI, nine grandchildren and three great-grandchildren. He also leaves a brother, Richard Ladd and his wife Linda of Albuquerque, NM. Chuck was the patriarch of a large and tightly knit family. He enjoyed bringing his family on winter cruises and treating his extended family to yearly summer vacations. While he had many professional accomplishments, he was also famous for hosting Christmas parties where he would serve his signature ?punch' concoction. He loved his students and colleagues, often inviting them to attend family functions, celebrations and holidays. Chuck was a diehard Patriots fan and would frequently host his family for football Sundays. An avid tennis player when he was younger, Chuck picked up golf in his later years with an engineering approach to the game. He received a Bachelor of Arts (cum laude) in mathematics and physics from Bowdoin College in 1955, and in the same year a Bachelor of Science in building engineering and construction from M.I.T. He continued on at M.I.T. to earn a Master of Science in civil engineering in 1957 and Doctor of Science in soil engineering in 1961. Chuck joined the M.I.T. faculty in 1961 and served until he retired in 2001 as the Edmund K. Turner Professor of Civil and Environmental Engineering. He was internationally known for his outstanding contributions to the teaching, research and practice of geotechnical engineering. Professor Ladd was renowned as a gifted teacher (with a style emulated by many former students who became faculty members) and innovative researcher on advanced technical topics. He was internationally sought after as a consultant working on large, complex and difficult civil projects. Among his numerous professional achievements, Professor Ladd was elected in 1983 to the US National Academy of Engineering and was the recipient of many research awards from the American Society of Civil Engineers (ASCE); including the Walter L. Huber Civil Engineering Research Prize, the Croes Medal, the Norman Medal and the Terzaghi Lecture Award. In 1995, he was elected as a distinguished member of ASCE and received the Hogentogler Award from the American Society for Testing and Materials. In 2012, Professor Ladd was awarded the ASCE Outstanding Project and Leaders lifetime achievement award for his contributions to engineering education. Professor Ladd leaves a lasting legacy and tribute to his life's work with his commitment to his students at M.I.T. and significant contributions to geotechnical engineering. Family and friends will gather to honor and remember Chuck on Friday, August 22nd, 2014 at 3:00 pm at the West Concord Union Church, 1317 Main St, Concord, MA 01742. A reception will follow at the Concord Country Club, 246 Old Road to Nine Acre Corner, Concord, MA 01742. Relatives, friends, and colleagues are kindly invited. In lieu of flowers, gifts in his name may be made to the following organizations: National Academy of Engineering www.nae.edu/giving, Trinitarian Congregational Church, 54 Walden St., Concord, MA 01742, Emerson Hospital, 133 Old Road to Nine Acre Corner, Concord, MA 01742. To share a memory or offer a condolence, visit www.concordfuneral.com

Concord, MA (978) 369-3388
Published by Boston Globe from Aug. 9 to Aug. 10, 2014.
To plant trees in memory, please visit the Sympathy Store.
MEMORIAL EVENTS
Aug
22
Memorial service
3:00p.m.
West Concord Union Church
1317 Main St, Concord, MA
Funeral services provided by:
Concord Funeral Home
MAKE A DONATION
MEMORIES & CONDOLENCES
3 Entries
I met Dr. Ladd IN 1974 in MIT.
I receive excelent recommendations to My
Geotechnical career And have all gratitude.
Rogerio de Souza Lima Consulting Geoengineer.
Rogerio Lima
November 6, 2014
I had the pleasure of meeting Chuck back in the 1980's: first when he came to Virginia Tech and gave a very spirited lecture, followed by an extremely lively discussion with Mike Duncan in the lecture hall that scared the wits out of the graduate students. I later had the pleasure to use his SHANSEP concepts on a project in Portland, Maine and called upon him for his insight because he had used the concept during the original construction of I-95. Every time I had the opportunity to spend time with Chuck was a pleasure. I'm so sorry we lost such a treasure. My deepest condolences to his family and loved ones.
Liz Smith
September 22, 2014
My Memories of Chuck Ladd

I would like to express my condolences to Chuck's family at his passing. He had a significant and very positive impact on my life and my professional career. I know that his family had to sacrifice over the years and were very supportive so that he could perform the tremendous work that became his legacy. As you know, he received many professional awards and recognition. However, I think the greatest professional contribution that he made was to influence the lives of his students.

I had no idea when I went to MIT that I would so thoroughly enjoy and benefit from Chuck's particular research and teaching style. His approach to problem solving is unique and has served me well over the years. He focused intensely on the details and spent a significant amount of time understanding the value of all of the data that he came in contact with. As a result of this approach, he was able to see things that others were not able to see.

Most recently I came across an aging high-hazard dam in Central Florida and implemented Chuck's approach in looking at the prior behavioral information. While others had looked at the same data and concluded that overall the dam was in very good condition, with Chuck's detailed and meticulous approach, I was able to prove that the dam was in a significantly distressed state and that it required extensive emergency repairs. Chuck's mentoring to me literally saved many lives and prevented substantial losses to the downstream community. There are many people that will never know that he had such a direct and substantial impact on their lives.

I am sure that many of his students have similar stories.

The true measure of the value of Chuck's professional life will not be apparent for many generations. The lessons that he taught his students have in turn been taught to others in an ever increasing circle of influence. His influence has been substantial and he will continue to positively impact the world.

All of those who came in contact with him were better professionals as a result.
Glen Andersen
August 13, 2014
Showing 1 - 3 of 3 results