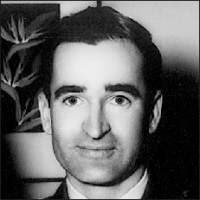 FUNERAL HOME
Concord Funeral Home
Director - Glenn D. Burlamachi, CFSP
Concord, MA
GRABHORN, Edgar A. Age 86 of Concord. Asked recently how he would like to be remembered, Edgar replied, "not as a warrior but as a painter." He died on December 29, 2010, at age 86, from complications due to Parkinson's disease. Born on July 19, 1924, Ed was raised in Greenfield, Indiana. He delighted in a childhood spent largely out-of-doors, which instilled in him self-sufficiency and a deep love of nature. The son of a news printer and an artist, from an early age he took up sketching and painting, a talent he pursued with joy throughout his life. During his first semester at Purdue University in 1943, he enlisted in the Army Air Corps. On May 29, 1944, he was the sole survivor when his aircraft was shot down over the Baltic Sea during a mission in World War II. For one year he was held in multiple German prison camps. Liberated at the end of the war, and after a lengthy hospitalization, he became fit to return to active duty. For the next twenty-three years, Ed served his country with honor. His sacrifice, survival and service made a better world for us all. In 1953 he married Marion (Huyssoon), entering into what would be a fifty-seven year partnership filled with love, family, friends and travel. For years Ed and Marion and their family were stationed in many places both overseas and in the United States. In 1964, after receiving his degree in electrical engineering from the University of Oklahoma, he and Marion settled in Concord, Massachusetts. Retiring from the Air Force in 1969 with the rank of colonel, he began a second career at Arthur D. Little, Inc., in Cambridge, Massachusetts. For twenty years he continued his world-wide travels as a consultant for ADL, working with countries and corporations to develop global telecommunications strategies and systems. He was recognized for his comprehensive study of the condition of world telecommunications on a country-by-country basis. Following his retirement in 1990, he embarked upon his third career as an artist, pursuing his lifelong passion for watercolor painting. He enjoyed countless hours painting in his studio at the Emerson Umbrella Center for the Arts in Concord and teaching others the process. Happiest when outdoors, Ed was often seen painting the natural landscapes in Concord which he brought to life with his exceptional ability to capture light and color. Mainly self-taught, he showed his paintings in many juried exhibitions and exhibited locally numerous times. He was among 100 artists accepted in the New England Watercolor Society's 6th Biennial North American Open Show in Boston. In 1998, his painting "Still Water" was one of 100 paintings selected for the New England Open Exhibition of the New England Watercolor Society. He was a Distinguished Artist member of the Concord Art Association. As Ed once remarked, "I have had more fun painting these pictures than anyone is going to have just by looking at them." Keenly intelligent, he was articulate on a broad range of topics and remained studious and curious throughout his life. Ed and Marion shared a love of the arts and together regularly enjoyed the Museum of Fine Arts, St. Botolph's Club, the Boston Symphony Orchestra, Lyric Opera and many local cultural activities. In particular, at the Museum of Fine Arts, Ed and Marion donated many hours helping with the Japanese Woodblock Print Project. As a volunteer, Ed served on the founding committee to bring cable television to Concord, a controversial proposal at that time. He was a member of the Green People, clearing trails and maintaining conservation land in town and he took it upon himself to create a map of all the walking trails in Concord which he donated to the Concord Land Conservation Trust. Over many years, Ed enjoyed assisting with set design for the Concord Players theatre group. Athletic all his life, Ed was always ready for a game of tennis or a round of golf at the Concord Country Club, a swim at White Pond, or skiing on a winter day. A spirited competitor, with a smile in his eyes he usually trounced his opponent at chess, scrabble or cards. As part of a dedicated men's hiking group, following back roads and trails he walked "the length of Massachusetts from west to east and east to west about ten to fifteen miles at a time and across Connecticut, following trails about ten miles inside the border, and north to south across Rhode Island." Ed was only slowed down by advancing Parkinson's disease. Ed cherished his family and was a wonderful father to his four children. There were many Grabhorn family traditions shared throughout his life, including decades of summers spent at Eagle Camp on Lake Champlain in South Hero, Vermont. To his wide community of friends and colleagues Ed epitomized all that we acknowledge as hallmarks of the "Greatest Generation"; devotion to family and friends, a commitment to high principles and the service of his country, and a dedication to the pursuit of excellence in all the many endeavors he undertook. Ed could always be counted on for well thought out and considered insights and perspectives and the special kind of real leadership that is so rare today. He was a true gentleman. His eldest son, Clifford A. Grabhorn, died in 2005. Ed is survived by his wife Marion, his son Paul A. Grabhorn of Santa Fe, New Mexico, his daughter Lynn G. Huggins and her husband Charles E. Huggins, Jr. of Concord, Massachusetts, his daughter Ann G. Clemens and her husband Samuel C. Clemens of Cambridge, Massachusetts, his daughter-in-law Jill Wu of Acton, Massachusetts and five grandchildren in whom he took great delight; Alyssa, Sarah, Emma, Paul, and Emerson. His burial at Sleepy Hollow Cemetery in Concord is to be private. In lieu of flowers, donations may be made in his name to the Parkinson's Foundation (Movement Disorders Unit), 15 Parkman Street ACC715, Attention Dr. Growdon, Boston MA 02114. Arrangements under the care of Concord Funeral Home, Concord. For online guestbook visit: www.concordfuneral.com

Published by Boston Globe from Jan. 3 to Jan. 4, 2011.
To plant trees in memory, please visit the Sympathy Store.
MEMORIAL EVENTS
To offer your sympathy during this difficult time, you can now have memorial trees planted in a National Forest in memory of your loved one.
Funeral services provided by:
Concord Funeral Home
MAKE A DONATION
MEMORIES & CONDOLENCES
5 Entries
I am so sorry for the loss of your dear loved one. It's comforting to know that God cares for all of us. The Bible gives us hope that one day we can see our loved ones again. On behalf of all mankind Jesus surrendered his soul. John 15:13 says “No one has love greater than this, that someone should surrender his soul on behalf of his friends.” Truly I am sorry to hear of the loss of your dear loved one and I hope these few words will bring you comfort and hope.
Lauren Bucholtz
January 8, 2011
I will always be grateful for the mentoring that Ed gave me when I succeeded him as President of Eagle Camp. We didn't always see eye to eye, but I tried to retain many of the things that he introduced during his term of office. He will be missed. My condolences to Marion and their children.
Bill Drury
January 6, 2011
To Marion and the Grabhorn family

We are very sorry for your loss.

Ed has plenty of new material to paint where he is now.

May his memory be eternal.

Frank and Mary Ned Fotis
Frank & Mary Ned Fotis
January 6, 2011
I was deeply saddened to find Ed gone when I visited Carlton Willard today, and will miss our conversations and his history lessons. My thoughts of him have been expressed in a note to him at Christmas, and to his family I extend my sincere condolences. Our friendship was too brief.
Mark Davies
January 5, 2011
To the Grabhorn family,
Im deeply saddened by your loss
Alan Robidoux
January 4, 2011
Showing 1 - 5 of 5 results