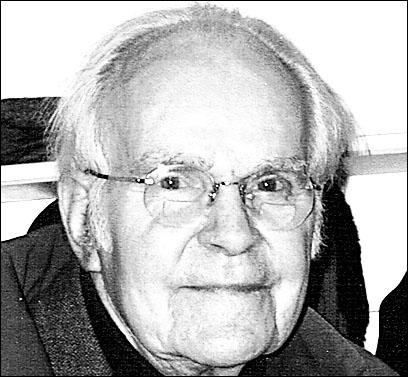 BORN
1923
DIED
2014
FUNERAL HOME
Burke & Blackington Funeral Home
1479 Washington St
West Newton, MA
NUTTING, Rev. Edmund W. Of Needham, passed away peacefully in his sleep on November 30, 2014 at Newton-Wellesley Hospital, Wellesley, MA. He was the husband of the late Mary "Myndie" (Howard) Nutting. They enjoyed 64 years of marriage. Ed was born June 10, 1923 in Wellesley Hills, Mass., the third of three sons of the late William E. and Mary (Hutchins) Nutting. He was an active youth member of the First Congregational Church, Wellesley Hills and graduated from Wellesley High school in 1941. He graduated with a BA from Bates College, Lewiston, Maine in 1945. He continued his education at Andover Newton Theological School in Newton Center, MA, graduating in 1949 with a Bachelors of Divinity. While there, during the summers of 1947 and 1948, Ed was the Student Minister in Manville, and Keeline, Wyoming. After he was ordained in June of 1949 he served as the Minister of Education at The Second Church in Newton, MA, and in 1953 he became the Associate Minister, First Parish Congregational Church, Wakefield, MA, where he was responsible for Christian Education, Youth Groups and Mission Outreach Education. In 1957 he was called to be pastor of the First Congregational Church, Rockport, MA, retiring in 1972. Rev. Nutting will be long remembered for his contributions to the Church Youth Group as well as a major building project enlarging the church to what it is today. He will also be remembered for silencing the Sunday noon town whistle as he found it disruptive to his sermons. During his time in Rockport he was also the First President of the Cape Ann Interfaith Commission. In 1973 he was Interim Director, Craigville Conference Center, Cape Cod (Mass Conference of United Church of Christ) and in 1975 became Associate Director of Development for the United Church Board for World Ministries and Massachusetts Conference Director of Planned Giving. He retired to his Lanesville home in 2000. In his free time, Ed enjoyed working on projects in his yard and on his house, bird watching with Myndie, researching genealogy on his families and spending time with his children, grandchildren and extended family of cousins, nieces and nephews and grand nieces and grand nephews. Ed and Myndie spent countless hours helping Stephen and Philip with projects around their houses. Ed was a very helpful and generous person, and while serving as a long time volunteer with Heifer International and their Overlook Farm in Rutland, MA, benefited the lives of many people the world over. Ed will be greatly missed. Mr. Nutting was predeceased by his wife Mary "Myndie" in 2010 and his brothers William and Lincoln in 2014. He is survived by a son Stephen and grandson Schyler of Brownfield, ME, and a son Philip, husband of Cheryl (Peabody), granddaughter Cecely and grandson Tyler of Rockport, MA. Burial will be private in the family lot in the Westminster East Parish Old Cemetery in Westminster, VT. In lieu of flowers contributions may made in his name to Heifer International, www.heifer.org, 1 World Avenue, Little Rock, AR 72202, 855-948-6437. A gathering of friends and family will be held January 24, 2015 from 2 to 4 PM at the First Congregational Church Fellowship Hall for a celebration of his life.