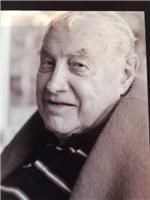 Published by Boston Globe on May 17, 2015.
To plant trees in memory, please visit the Sympathy Store.
MEMORIAL EVENTS
To offer your sympathy during this difficult time, you can now have memorial trees planted in a National Forest in memory of your loved one.
Funeral services provided by:
Concord Funeral Home
MAKE A DONATION
MEMORIES & CONDOLENCES
4 Entries
Betsy--I found out simultaneously about both your parents and, of course, Rob. (Thanks to the ambiguous magic of the Internet.) Though we lost touch so many years ago, I was very sorry to learn of his passing. I didn't know your parents very well (as kids don't) but Rob really was a very good friend for many years--from Peabody School all the way through to his first year at Harvard (and my first year at U of Toronto). He never said much about your years there, and after I became familiar with the place (and indeed Canada) I often wondered what your experience up here was like. I've lived here since 1968 (retired now), and since your family introduced me in effect to Toronto. I probably should have thanked you long ago. In any event, profoundest condolences on your losses and I wish you and your family--and, I gather, Rob's widow and daughter--all the best.
Henry Phelps
henry phelps
June 3, 2015
I am so very sorry for your loss.PSALM 146:5.
Frances
May 22, 2015
We will sincerely miss both your Mother and Dad here at Newbury Court. Your fathers' wit and your mother's erudition were like a breath of fresh air. Elizabeth always referred to Pat as her "boy toy". With deepest sympathy, Mary Lu and Brooks Cowgill
May 19, 2015
So sorry about the loss of your dad Betsey. He had an interesting adventurous life. I am sure that the two of you had long and heartfelt discussions and that you will miss him greatly.
Kathy Betts
May 18, 2015
Showing 1 - 4 of 4 results