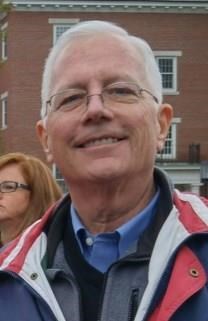 BORN
1956
DIED
2017
FUNERAL HOME
J.S. Waterman Langone Chapel
580 Commercial Street
Boston, MA
LYNCH, Francis Matthew Was born March 13, 1956 in New York City, the eldest child of Francis Thomas Lynch and Jeanne Marie Mooney Lynch. He died unexpectedly July 12, 2017 in Boston, MA of gastrointestinal cancer. A 1974 graduate of Barrington (Rhode Island) High School, Frank was president of the state-championship debate team and played roles in several drama productions. He received a Bachelor of Arts degree in 1978 and a Juris Doctor degree in 1981 from Boston College and its College of Law. Frank led the Fulton Debating Society at BC for several years and was awarded the Fulton Medal as the outstanding debater at the College in 1976. The greatest joy in Frank's life came from being Uncle to three nieces (and an "honorary niece") and a nephew and devoted friend to many. He taught his nieces and honorary niece Carmen Amara-Levin to ski. He prominently displayed their artwork at his Scituate home and made his nephew in Oregon a long-distance fan of the Boston Red Sox and New England Patriots. He shunned his illness to cheer his eldest niece at her college graduation in May. His patience with and enthusiasm for them and their interests were inexhaustible. He shared treasured friendships with many dating back to his years at BC, even playing in a golf tournament with his dear friend, Ed Hinchey, the week before his passing. Frank was particularly grateful to Ed and Tanya Oldenhoff and the Hinchey daughters for the love and care they provided during his illness. Frank practiced law at three firms over 36 years, finishing his career as Senior Partner at Cetrulo LLP. He earned widespread respect in the Massachusetts, Rhode Island, and Connecticut legal communities for his intellect, integrity, and sense of fairness. His work earned him recognition as one of the Top Ten Lawyers of the Year by Massachusetts Lawyers Weekly in 1997 and designation as a Massachusetts Super Lawyer 2004-2016. He loved the practice of law and honored the best aspirations of the profession. He shared his commitment to public service with the Town of Scituate, serving for many years on the Board of Health and Zoning Board of Appeals. Frank was predeceased by his parents. He is survived by his sister, Barbara Lynch of Norwich CT, her spouse Greg Sinay, and their daughters Zoe and Quinn Sinay as well as his brother Kevin Lynch of Portland, OR, his wife Stephanie, and their children Olivia and Joseph. Serrvices are being scheduled for a later date. Boston Harborside Home

617-536-4110
Published by Boston Globe from Jul. 18 to Jul. 23, 2017.
To plant trees in memory, please visit the Sympathy Store.
MEMORIAL EVENTS
To offer your sympathy during this difficult time, you can now have memorial trees planted in a National Forest in memory of your loved one.
Funeral services provided by:
J.S. Waterman Langone Chapel
MAKE A DONATION
MEMORIES & CONDOLENCES
2 Entries
My company was Frank's client and that is how we became acquainted. I did meet Frank a few times, but most of our contact was by telephone. Frank was patient and easy for me to work with. He was very much like a good friend.
Bill Watman
August 4, 2017
Frank was a fantastic lawyer and I always enjoyed working with him. I am glad I could call him a friend. Clay White from Texas
Clay White
August 2, 2017
Showing 1 - 2 of 2 results