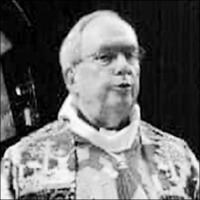 BORN
1946
DIED
2021
FUNERAL HOME
Conte Funeral Home - North Andover
17 3rd Street
North Andover, MA 01845
HOGAN, Reverend George "Jerry" Went Home to Our Lord on Wednesday, May 5, 2021 Father George G. Hogan "Father Jerry" went home to our Lord on Wednesday, May 5, 2021. A Woburn native born on April 13, 1946, he is the son of the late George and Alice (Fitzpatrick) Hogan and nephew of the late Elizabeth and Mary Fitzpatrick. Members of the Hogan, McGann, Whoriskey, Dahar, Fisher, Bernard, Connolly and Hughes families are grieving his passing along with so very many dear friends. Hogan is an alumnus of Woburn High School and St. John's Seminary, Brighton. On May 18, 1974, he was ordained at the Holy Cross Cathedral by Humberto Cardinal Medeiros. The following was written by Father Robert O'Grady: Father Hogan's first assignment was as an associate at St. Theresa of Avila in West Roxbury. It was the first of almost two score assignments be would receive in the intervening years. Following West Roxbury he was assigned to St. Paul, Wellesley in 1980 and in 1983 he began a decade long service as campus minister at The University of Massachusetts Boston Campus and at Emmanuel College; during these years he lived in residence at St. Augustine, South Boston. It was during these years in 1990 actually that Father Hogan, he goes by "Jerry", was invited to assist in the "Circus Ministry" — this was a national ministry directed by the United States Conference of Catholic Bishops and in large part funded by the Catholic Church Extension Society of Chicago. Thus the "Circus Parish" was a veritable "national" or better nationwide parish. Wherever a circus might be, there had to be the Circus Chaplain. Because of Father Jerry's work in the Boston area much of his circus connection was with the East Coast Shows with an emphasis on Ringling Brothers and Barnum and Baily combined shows. There were others, though their chief characteristic was that they were people on the move. Over the years of his Circus Ministry, Father Jerry accrued hundreds of thousands of miles especially in the air but also on land travelling to and then with the Circus. Fr. Jerry participated in a myriad of circus organizations – CFA, CHS, CMB, OABA, IISA and was the guiding hand for the Circus and Traveling Shows Retirement Project in Sarasota, Florida. This project was dear to his heart, offering affordable housing for retired show people, many of whom were his friends. Through his contacts with these circuses and organizations, because of the itinerant nature of the circus, his influence was felt both in the US and abroad. Following his campus ministry assignment he was assigned to St. Michael, North Andover, serving as parochial vicar and then as member of a team ministry during the years 1994-2012. He was still serving the Circus as well. After 2012 his assignment list lengthens. He had taken on the Circus as a more than part time ministry and so during the winter months he would be on lend lease to the Diocese of Venice in Florida wherein the city of Sarasota is located, thus between 2013 and 2021 he was for part of each year on lend lease to St. Martha's Parish. When he returned north he was either a parochial vicar, parish administrator or in residence: Our Lady of the Assumption, Marshfield, St. Agnes, Middleton; St. Rose of Lima, Topsfield; St. Mary, Foxborough; St. Francis of Assisi, Dracut; Sacred Heart, Lynn; St. Mary, Lynn; St. Mary, Wrentham; St. Martha, Plainville; Good Shepherd, Wayland; Our Lady of Fatima, Sudbury; and most recently, Our Lady of Sorrows, Sharon where he served as administrator during a six month period. (Pilot, 2020) God did not take Fr. Jerry on May 5th; because Father Jerry was always with God - it is just now that he is meeting up with him, "down the road". Father Jerry was a father in the true pastoral sense of the word. He embraced God's people everywhere he went and walked with them. He encountered others where they were in life, His joy and enthusiasm for life was contagious. The Lord could not have chosen a better ambassador! With Father Jerry on your side, the joys were enhanced and dark days a bit brighter. He was just fun to be around. The Father Jerry stories are legion. Each one punctuated with laughter and no one laughed louder, even at his own foibles, than he did. He traveled in so many circles and his interests were so broad. He loved the Circus, especially its people. He was so proud to be known as the Circus Priest and to minister to that community. He also enjoyed all sports, live theatre, on or off Broadway and could manage 18 holes of golf in less than 3 hours. He was a definitive Boston Sports fan and had season Patriot tickets before No. 12 was even born. He lived more in 75 years than most can manage if they lived several lifetimes. Mostly, he was our dear, dear friend who taught us that to "love another person is to see the face of God". He loved his priesthood and he loved us. As he would often sign off his messages, we now send him off – Go in peace Father Jerry! "See you down the road." Visiting Hours: Father Jerry will be waked at St. Michael's Parish Church, North Andover on Sunday, May 9th from 3:30 until 7:00. A Mass of Christian Burial will be celebrated on Monday, May 10th at 11:00. Burial will follow at Calvary Cemetery, Woburn. Please note that due to the current pandemic and Fr. Jerry's large extended family, there will be limited seating at the Mass. Wearing masks and maintaining safe distancing is important. For your convenience and safety the Mass will be live streamed on the Parish's YouTube Chanel. Funeral arrangements are being handled by Conte Funeral Home, NORTH ANDOVER, MA. Donations may be sent to: Showpeople's Winter Quarters P.O. Box 15121 Sarasota, Florida 34277 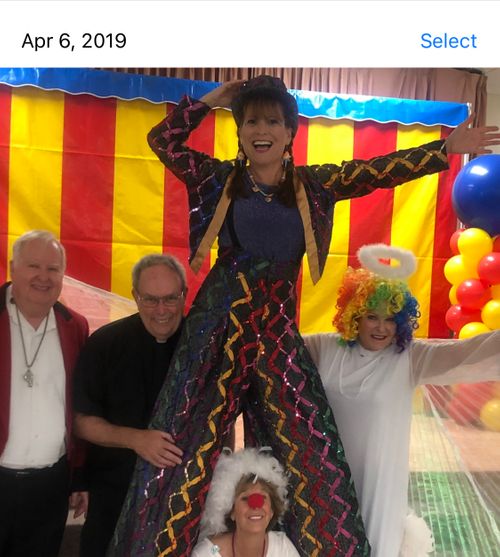 It took 75 years and a day, for Fr. Jerry to complete a masterpiece (a departing gift for all of us .) one that will hold us together as it’s story unfolds. A gift showcasing his labor of love, faith, family and friendship. A masterpiece, displaying many textured, vivid colors and yes, even imperfections! What is this amazing gift, Why 75 years and a day to complete , you ask? A Tapestry with one missing thread on the day he left us. The missing Golden thread that will forever hold all of us together, Fr Jerry’s.
The hands of his guardian Angel, completed Fr. Jerry gift to us by Embroidered on them bottom of the tapestry , using the Golding thread, (See You Down The Road!”)
Love
Lynn and Michael McDonald
Lynn McDonald
Friend
May 9, 2021
Dear Fr Jerry, I will never forget you. You saved my life the day my mother-in-law died. I was determined to fly to Tennessee against medical advice. Thank God you were there to talk some sense into my head. I will forever hold you dear to my heart. I will miss you. Soar with the angels Fr Jerry.
paula J olliney
May 8, 2021
We were so saddened to get word about Fr. Jerry’s passing. We knew him during his assignment at St.Francis in Dracut. He was by far the best priest we had ever encountered. Our family enjoyed going to church because he made masses so fun and relate-able especially with young ones. His stories, life experiences and laughter were so infectious and interesting to hear about. It was always great discussing The Pats with him too. He certainly was not an ordinary priest he was a very personable, down to earth, fun to be around and he always made you feel special. Our hearts & sympathies go out to his large extended family during this sad time. Please let all the wonderful memories you have of him help you get through this difficult time. With our deepest sympathy a Dracut family
May 8, 2021
Fr Jerry - To my dearest friend Fr Jerry, I will miss you and our conversation about your love for trains, take care and have St Peter show you around the big model train set up in haven. You were always on track in all your project, now let the God and his Angels guide you. Take care, miss you
DR LOUIS E ROUSSEAU
Friend
May 8, 2021
I am an Emmanuel college alumni and Father Jerry was simply a joy to be around. I loved his laugh. He will be missed and he’s someone that touched my life forever. Denise Simpson 1993
Denise Simpson
Student
May 7, 2021
Fr Jerry I will miss u very much
mary Margaret langelier
Family
May 7, 2021