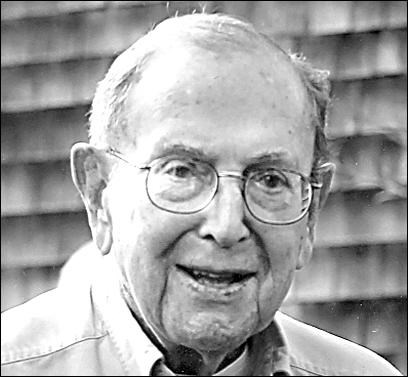 BORN
1920
DIED
2015
FUNERAL HOME
Waring-Sullivan Home of Memorial Tribute at Birchcrest
189 Gardners Neck Road
Swansea, MA
ROBINSON, Harry W. Age 94, of Little Compton, Rhode Island, died Wednesday, January 7, 2015. He was the husband of the late Clementine J. (James) "Clemy" Robinson. Born in Boston, a son of the late Clarence H. and Florence (Pitman) Robinson, he spent his youth in Hudson, MA, resided in Swansea from 1955 to 1960, lived in Needham and Pittsfield for several years, moving to Little Compton, in 1975. Mr. Robinson was a graduate of Hudson High School class of 1937, Kimball Union Academy in 1938, and was a graduate of Bates College in Lewiston, Maine class of 1942 with a degree in History and Economics.Mr. Robinson was a Veteran of the United States Coast Guard serving during World War II and attended their academy in 1942. During his service time he served on Martha's Vineyard, Newport, Rhode Island and in the South Pacific. He was awarded the World War II Victory Ribbon, the American Theater of Operations Ribbon, the Asiatic-Pacific Theater of Operations Ribbon and the Philippine Liberation Ribbon. He was employed by the former New England Telephone Company as a manager for 34 years retiring in 1980. He served the New England area during his career in various locations. Mr. Robinson was the former treasurer for the Little Compton Visiting Nurses, a member of the P.G. Club in Little Compton, the Elderberry Bowling Group and an avid photographer in his free time. He was a member of Telephone Pioneers of America, the Quequechan Club in Fall River, and a member of the Oriental Masonic Lodge of Edgartown, Massachusetts. He is survived by two daughters, Andrea R. Phillips of Little Compton, RI, Joan Thomas and her husband Harold of Hanover, MA, his granddaughter: Weatherly (Phillips) and her husband Greg of Homer, Alaska, his great grandchildren Rockwell Abbott and Vera Summer Bates of Homer Alaska. He was predeceased by his grandson Charles A. "CAP" Phillips and his son in-law Capt. Abbott "Bud" Phillips. He also leaves behind his wonderful caregiver and friend Robin Greenwood. His service of thanksgiving and tribute will be held on Saturday, January 10, 2015 at 11:00AM in the Waring-Sullivan Of Memorial Tribute BIRCHCREST, 189 Gardner's Neck Road, Swansea. Relatives and friends invited. Visiting hours prior to his service from 10:00 to 11:00AM. Contributions in his honor may be made to Robert Potter League for Animals, Inc., PO Box 412, Newport, RI 02840. Burial will be private. For tributes or directions:

To plant trees in memory, please visit our Sympathy Store.
Published by Boston Globe from Jan. 8 to Jan. 9, 2015.
MEMORIAL EVENTS
Jan
10
Visitation
10:00a.m. - 11:00a.m.
Waring-Sullivan Home of Memorial Tribute at Birchcrest
189 Gardners Neck Road, Swansea, MA
Jan
10
Service
11:00a.m.
Waring-Sullivan Home of Memorial Tribute at Birchcrest
189 Gardners Neck Road, Swansea, MA
Funeral services provided by:
Waring-Sullivan Home of Memorial Tribute at Birchcrest
MAKE A DONATION
MEMORIES & CONDOLENCES
8 Entries
Dear Andrea,
I am so sorry to hear about the death of your father and hope that you as well as you can be considering your loss. It was good to get to know him better by reading his obituary. I don't know if you remember me from Needham High School - Sandy Dow, now Sabra Dow. Your parents were very good to me I am alive and well in Newburyport. Please give my best to your cousin David - he was also very good to me. Take good care,
Sabra
Sandy Dow
February 6, 2015
We will truly Harry's calls that the tea pot was ready and our long talks and the many discussions. He was the best neighbor. I will always remember him as an Officer and a Gentleman. Bye bye Harry. Keith and Kathy Haley
January 10, 2015
Harry was a dear neighbor and a friend. He and Clemy always offered us food and drinks, always asked after our stories, and always offered some amazing stories of his own. He was quite talented in connecting with people, and was such a caring man. He will definitely be missed.
Elisabeth Nadin
January 9, 2015
Andrea,
I enjoyed getting to know your Dad when he was on the Board of the Little Compton Nursing Association. He was always very kind to me. Thinking of you and keeping you in my prayers.
Catherine and Susan Snell
Catherine Snell
January 9, 2015
My condolences. Harry hired me to stain his deck and do some other house painting in the early 1990s. It was during a very hot stretch and he kindly brought out some cool refreshments (tea or lemonade?) and showed me some of his photos. What a long, full life he lived. Best wishes.
Morgan Taylor
January 9, 2015
Sending sympathy and prayers
So happy to have known Harry, and I will always admire his gentle caring way. Love, Lisa and family
Lisa Stevenson
January 8, 2015
Andrea, Joan and Hal,

We bought our Chace Point home in 2005, and Harry was the first person we met. He was such a gentle man. We have memories of him taking his daily walk by our home. We are sorry for your loss but you should feel good that he had such a great life.
Helen Switzer
January 8, 2015
Dear Joan and Hal, I have wonderful memories of Joan's mom and dad and know they are together again. So sorry for your loss.
Susan Via
January 8, 2015
Showing 1 - 8 of 8 results