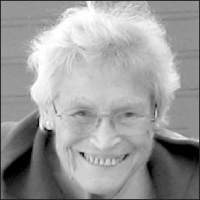 LADD, Helen Pratt Died on Friday, October 19th in her home in Amherst, MA. She was born on October 21, 1924 in New York City to Jane Abbott Pratt and George D. Pratt Jr. Helen and her sister, Anne (who predeceased her), attended high school at Cambridge School of Weston. She received her BA from Sarah Lawrence College in NY in 1946. She earned her Masters Degree in Social Work at the University of Pennsylvania in 1949. Helen married John (Jack) Ladd June 15, 1947. They had four children: Andrew S. Ladd (deceased 2008), Jennifer Ladd, Jeffrey B. Ladd, and Martha Ladd. Helen was second mother to Michael C. Ladd. Her grandchildren include: Gabe, Lily, Marguerite, Abbie, Georgia, as well as serving as second grandmother to Khidt and Noon Ladd and Martin and Maya Rose Peignet Ladd. Helen worked as a psychiatric social worker at Mass General Hospital in Boston, MA from 1966-1984. She later earned a Graduate Certificate in Conflict Resolution from the University of Massachusetts Boston. She spent 12 years doing mediations for the Community Dispute Settlement Center. Service is November 23th at Mt. Toby Meetinghouse, 194 Long Plain Road, Leverett at 2:00 pm. In lieu of flowers, contributions can be sent to Community Dispute Settlement Center, 60 Gore Street, Suite 202, Cambridge, MA 02141-1236.

Published by Boston Globe from Oct. 27 to Oct. 28, 2012.
To plant trees in memory, please visit our Sympathy Store.
MEMORIAL EVENTS
To offer your sympathy during this difficult time, you can now have memorial trees planted in a National Forest in memory of your loved one.
MAKE A DONATION
MEMORIES & CONDOLENCES
6 Entries
Helen will always live in my heart and prayers. My sympathy to the family
Frank Zito
November 5, 2012
Count me among those who were fortunate to have co-mediated with Helen. Wholly apart from her sensibility and sensitivity, I also admired the grit by which she managed each and every challenge she encountered.
Stephen Linsky
November 4, 2012
Helen was my co-mediator twenty years ago at the Community Dispute Settlement Center, when I was just beginning as a mediator. She exhibited such ease and grace -- I couldn't have asked for a better teacher. Her optimism, authentic love of people, and zest for life were infectious.
David Hoffman
November 4, 2012
Helen, Mrs. Ladd, was such a wonderful role model. Her caring and her inner strength helped to guide many in the right direction.
Cathleen Gallo
October 28, 2012
A lovely soul with a zest for life, learning, and giving...much like her amazing daughter Jenny. So sorry for your loss Jenny, and ours, as well.
Wendy Foxmyn
October 24, 2012
A good and generous friend, a zest for life, passionate about the planet's welfare, funny, clear-eyed, endlessly interesting and interested. A mountain of a woman...
Sally Higginbotham
October 24, 2012
Showing 1 - 6 of 6 results