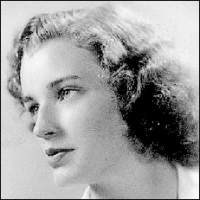 ELLIS, Jean Crompton Born June 25, 1923 in Cambridge, Mass, the daughter of the late Catherine (Cassidy) Ellis and the late Alexander Ellis, was a resident of Osterville, Mass., ending her days in the Philip Hulitar Center in Providence with her immediate family by her side. Ms. Ellis attended the Convent of the Sacred Heart, Noroton, Connecticut and Manhattanville College, graduating in 1944. Between 1945-'47, Ms. Ellis served in the Red Cross in Okinawa and Korea as an aide. In the 1950s, she worked at the New Yorker magazine as a copy girl. She was an accomplished writer and freelance film critic for the Office of Film and Broadcasting of the U.S. Conference of Catholic Bishops. During the Kenyan Revolution (Mau Mau Revolt) of the 1950s, Jean wrote dispatches about the conflict for the news media, and it was in Kenya that she befriended the family of Ian and Oria Douglass-Hamilton, the founders of Save the Elephants. After moving to Cape Cod in 1975, Jean became a life-long trustee of the Osterville Village Library, where she was an active participant in the day-to-day activities of the library, organizing many author readings and book signings. She was a communicant of Our Lady of Assumption Church in Osterville. Ms. Ellis leaves her 9 cherished nieces and nephews. She was predeceased by her brother, Alexander Ellis, Jr., and is survived by her sister, Shirley E. Cummings, of Wakefield, Rhode Island, and her cousin, Jennifer Carr-Jones, of West Sussex, U.K. A Mass of Christian burial will be held Thursday at 10:00 A.M. at Saint Sebastian Church, 67 Cole Avenue, Providence. Burial will follow in Swan Point Cemetery. Ms. Ellis' family requests that, in lieu of flowers, donations be made to the Osterville Village Library, Osterville, Mass., or the Philip Hulitar Center, 1085 North Main Street, Providence, RI 02906. Condolences may be left at monahandrabblesherman.com

Published by Boston Globe from Mar. 15 to Mar. 16, 2011.
To plant trees in memory, please visit the Sympathy Store.
MEMORIAL EVENTS
To offer your sympathy during this difficult time, you can now have memorial trees planted in a National Forest in memory of your loved one.
MAKE A DONATION
MEMORIES & CONDOLENCES
2 Entries
Dede,
Sending you and your family love and light as you reflect on Aunt Jean's full and vibrant life.
Beth McKinney
March 16, 2011
Dede,
Keeping you and your family in my thoughts and prayers.
Carolyn Kasper
March 16, 2011
Showing 1 - 2 of 2 results