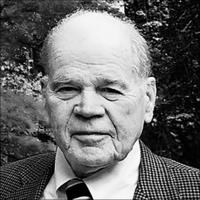 BORN
1926
DIED
2020
THORNDIKE, John Lowell Distinguished advocate of the arts, the environment and business We are sad to share the news that John Lowell Thorndike died from Covid virus complications on May 20, 2020 at the age of 93 after a full life enjoying family, friends, all sports (except basketball), symphony music and birding, among other passions. John was predeceased by his beloved wife, Dorothy, and son, Jack. John was born in Chestnut Hill, Massachusetts on October 17, 1926 as the third of Dr. Augustus and Olivia Lowell Thorndike's five children. He attended Chestnut Hill School, Milton Academy, Phillips Andover Academy and enlisted in the US Army near the end of World War II before attending Harvard College, where he threw the hammer on the varsity track & field team and remained an ardent lifelong supporter of Harvard Track. John married his sweetheart, Dorothy Dudley, after graduating from Harvard, and they settled in the town of Dover, where they raised Jack and designed and built a house they would call home for the next fifty years. John served for many years as a selectman, town moderator and cemetery commissioner in Dover. John and Jack shared a love for music, and 'Dor' was a renowned horticulturist and skilled equestrian. Their extended family remember wonderful holiday gatherings, always with one of their steadfast Dalmatians watching over the assembled herd. John spent more than 40 years in the investment management field and retired as a longtime Director and Vice President of Fiduciary Trust Company. He was a Board Director of the Eaton Vance family of Mutual Funds, the U.S. Charitable Gift Trust and the Provident Institution for Savings. He also served as a member and President of the Massachusetts Health and Educational Facilities Authority. John may be best known for his deep involvement and stewardship of several nonprofit organizations. He was made a Life Trustee of the Boston Symphony Orchestra, having served roles as Trustee, Treasurer and Vice President on the BSO Board for more than 20 years, including his work on the search committee that brought Seiji Ozawa to Boston and helped shape the direction of the Orchestra for the next several decades. John was a Trustee, board Treasurer and long-term adviser to both the Massachusetts Audubon Society and the Cotting School, where John's care and passion never waned. He also served as President of the Harvard Club of Boston. John is survived by his daughter-in-law, Dr. Mary Thorndike, and his beloved granddaughters, Allegra and Isabel Thorndike. John was predeceased by three of his siblings, Gus Thorndike, Jr., Olivia 'Oie' Cheever and Sarah 'Sally' Haydock. He enjoyed a close relationship with his remaining brother, W. N. 'Nick' Thorndike, until the end of his life. John also took great pleasure in his extended family and presided as the patriarch over many raucous dinners at the Glades. John's extended family includes his brother and sister-in-law, Nick and Joan Thorndike, 15 nephews and nieces and numerable grandnephews and grandnieces on both the Dudley and Thorndike sides. He was known to mix StrawberryQuik into his milk and would invite friends and family in for an occasional 'nightcap,' but he disliked lobster and all forms of potatoes. Details on a Memorial Service in John's honor will be forthcoming, and gifts in his honor can be sent to the Friends of Boston Symphony Orchestra, 301 Memorial Ave., Boston, MA 02115.

To plant trees in memory, please visit our Sympathy Store.
Published by Boston Globe from Jun. 5 to Jun. 8, 2020.
MEMORIAL EVENTS
No memorial events are currently scheduled.
To offer your sympathy during this difficult time, you can now have memorial trees planted in a National Forest in memory of your loved one.
MAKE A DONATION
MEMORIES & CONDOLENCES
3 Entries
Mister Thorndike was very good to me as an undergrad. We all appreciated his support of XC and track and we know he was a staunch supporter of our coach, Bill McCurdy.
Tim McLoone
August 12, 2020
To Nick and all of John's loved ones.
I share your sadness and extend my deepest sympathy upon learning of the end of John's full and good life.
I will remember him for his active contributions to the betterment of the civic and cultural life of his community.
Please know of my prayers for John's peace and for the strength of your family in all the days ahead.
Paul Kirk
June 7, 2020
John Thorndike, was such a gentleman. I am so thankful I got to meet him. I met him at Fox Hill Village, when I used to work in the Activities department. We shared many great conversations and he was always kind and had a great laugh. Rest in peace, John. My condolences to all his family and friends. He will be greatly missed.
Maria O'Connell
June 7, 2020
Showing 1 - 3 of 3 results