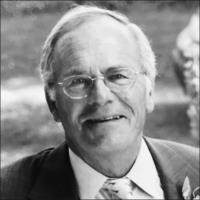 FUNERAL HOME
Sullivan Funeral Home - Hanover
551 Washington Street
Hanover, MA
JOHNSTON, Kenneth A. Mr. Johnston, 81, passed away suddenly but peacefully early Monday morning, October 25, at Beth Israel Hospital in Boston. The husband of Martha Goss Johnston, proud father of Dr. Holcomb Johnston Darby currently of Bozeman, MT, and dedicated grandfather of Alexandra and Maya Darby. The son of Irish immigrants, he grew up in Locust Valley on Long Island, NY. As a MBA graduate of Columbia University and with a BA from Boston University, he began his career with Smith Barney in New York City, later moving to the Boston area to work at Loomis Sales followed by a successful career at Eaton Vance. A retired financial manager, Mr. Johnston was an active fundraiser for many charities and conservation efforts including: as president of the Duxbury Rural and Historical Society, board member of the Duxbury Beach Reservation and as a member of the Duxbury Yacht Club. As a long-term resident and dedicated lover of Duxbury, MA, Ken discovered and fell in love with its charm on a bike trip in 1972. That was it for him – moving here and swearing never to leave. Vowing to make it even better, he created what could easily be called an "Arboretum" with over 25 unique tree specimens which he planted at his home and grounds on St. George Street. Though a wonderful gardener, Ken didn't rest on those laurels as his hobbies were many. As a ham radio operator from early high school (call letters: KJ1Kj) he was recognized for predicting the winners at the 1956 Summer Olympics. His "Ham" buddies still meet, as did he, for bragging rights every Saturday morning for breakfast. As a golfer, Ken studied and learned as his avidity grew – even winning his last match as a member of the Bay State Seniors. Travel took up quite a bit of time with visits to many parts of the world including: Africa, China, Japan, Bhutan, Europe, India, South America, several Caribbean islands and many more. Those yearly trips to South America featured another of his passions – fly fishing, at which he excelled. So close to the water, the sea air drew Ken to boating with a sporty run-about as his enabler. But, most important to Ken was his family – from his parental heritage to the future of his two beautiful grandchildren. An unapologetic doter, he was the epitome of loving grandfather to Alexandra and Maya - building "hide-outs," chasing sleds and being a "go-to" Grandad. The many friends of Ken would often hear a happy Irish brogue and, looking around for a green elfin character, would see Ken having a go at a newcomer who was convinced he was in Dublin. Proud to be Irish, he was never afraid of showing it. Besides his wife, daughter and grandchildren, Mr. Johnston leaves a sister, Joan Cruickshank of Salt Lake City and many, many friends who will miss him deeply. He has blessed those around him with a good and rich life. A family Graveside Service will be held at Mayflower Cemetery, Duxbury followed in the spring by celebration of a special life – well lived - on Ken's lawn under Ken's trees. In lieu of flowers, please consider a donation to the Duxbury Rural and Historical Society, PO Box 2865, Duxbury, MA 02331 or the Duxbury Beach Reservation. To sign Ken's online guestbook, please visit SullivanFuneralHomes.com

Published by Boston Globe from Oct. 27 to Oct. 28, 2021.
To plant trees in memory, please visit the Sympathy Store.
MEMORIAL EVENTS
To offer your sympathy during this difficult time, you can now have memorial trees planted in a National Forest in memory of your loved one.
Funeral services provided by:
Sullivan Funeral Home - Hanover
MAKE A DONATION
MEMORIES & CONDOLENCES
3 Entries
We will truly miss our friend, meeting he and Marta, at our beloved spot in Wyoming! Enjoy the mountains Ken, know they are beautiful!
Jimmie and Gail Robinson
Friend
November 3, 2021
Marta &Family, I know how much Ken loved Duxbury, and the pride he took giving so freely of himself back to the community. A wonderful exchange of energy. He will be sadly missed by all that knew him, however his memory will love on through a life well lived. Sincerely, Tracy K. Woods
Tracy K. Woods
Friend
November 2, 2021
He will be missed by all of us who knew and worked with him at the Duxbury Rural and Historical Society for the many things he did for us in his unprecedented 7 years of Chairing the DRHS Board of Trustees and beyond.
Sally Redmond
November 2, 2021
Showing 1 - 3 of 3 results