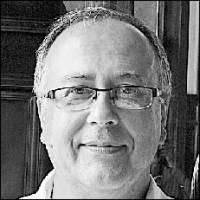 LARSON, Kenneth Lowell Age 59, passed away unexpectedly on November 15, 2011 at his home in West Roxbury, MA. Ken was born on May 11, 1952 in Williston, ND to Wesley and Imogene Larson. He grew up on the family farm in Northwestern (Grenora) North Dakota. Following high school, Ken attended the University of North Dakota in Grand Forks and graduated with a Bachelor's Degree in Speech Pathology. After college, Ken moved to Port Townsend, Washington and started his school career as a speech pathologist in the Port Townsend/Port Angeles schools. Ken later moved to Seattle, Washington where he expressed his culinary and artistic talents by establishing both a catering and upholstery business. His next and final move was to Boston, Massachusetts where he spent the last 27 years as an administrator with the Rafael Hernandez School. Ken spent his professional life as the Director of Operations/Assistant Principal for the Rafael Hernandez School where he worked side by side with his great friend, Margarita Muniz. Ken was an outstanding educator and administrator. He was instrumental in supporting Principal Margarita Muniz and together, they made the Hernandez School an outstanding two-way bilingual school. Ken will be missed by a multitude of students, parents and especially the staff of the Hernandez School. Without a doubt, his passing is a tremendous loss not only to the Hernandez School, but to the entire Boston Public Schools family. Ken's passions included traveling the world. Each summer at the end of the school year, Ken and his long time friend Margarita Muniz took time out to explore the world. These places included Europe, Central and South America, Egypt, Norway, and the Galapagos Islands. Ken loved to cook and enjoyed foods from all over the world. He leaves behind his father and step-mother: Wesley and Norma Larson of Williston, ND; 2 brothers- Fred Larson of Grenora, ND and Jeff (Liz) Larson of Buffalo Grove, IL and one sister: Karen (Steve) Gorseth of Big Lake, MN, ex-wife Karen Plattes. Nieces and Nephews: Taylor, Whitney, Kaisa, Tony, Alexis, Dean, Erin, Allison and Laura. Ken was preceded in death by his brother Terry and his mother Imogene. He will be forever missed by his dear friends Bruce Jordan, Kathy Rutherford, Rochelle Burgos, and the entire Hernandez Community. A memorial gift can be made in Ken's name to the Friends of the Hernandez, 61 School Street, Boston, MA 02119. Foronlineguestbook www.vazzafunerals.com

Published by Boston Globe from Nov. 21 to Nov. 22, 2011.
To plant trees in memory, please visit the Sympathy Store.
MEMORIAL EVENTS
To offer your sympathy during this difficult time, you can now have memorial trees planted in a National Forest in memory of your loved one.
MAKE A DONATION
MEMORIES & CONDOLENCES
9 Entries
I am so very sad to hear that Ken has died. Both my sons went to Rafael Hernández school. Quite a few years ago, my son Sam was sent to the office because he refused to spend his "free period" drawing and/or coloring. And Ken, god bless him, told Sam that he was absolutely right.

A small anecdote, but I hope it says it all. Thank you Ken.
Martha Fay
December 1, 2011
To Ken, dear friend, I cannot believe you are gone. The pepper shaker you gave me is on my kitchen table every day. As it adds savor to my daily meals, you added savor to my life, year after year. I'll miss your wit, your charm, your tales of world travels (and those great photographs), your home decorating flair, and your gift for putting on Absolutely Stunning Parties. So glad we saw Amanda Palmer in "Cabaret" - a memory I'll cherish forever because of you. Most of all I'll miss your enduring friendship.
Polly Laurelchild-Hertig
November 28, 2011
I am a teacher at the JOSEPH LEE SCHOOL, and I am sorry to hear about our educational dept, loss , KEN was a good person. I will keep the family in my prayers. GOD BLESS.
Myrtle Huggins
November 27, 2011
Dear Ken. I always admire your patience and serenety. Thank you so much for taking care of all, I mean, all the problems related to late buses at the Hernandez and for being extra nice to the students and parents. RIP. I pray to God for your eternal rest in his glory. Mirtha.
Mirtha Cabello
November 23, 2011
I am thankful to Ken for his unwavering commitment to the teacher, families and students at the Hernandez. I will never forget the laughter, sarcasm, and ways of growing me up that he imparted to me more than 14 years ago. I am privileged to have known Ken and I pray he is resting forever.
November 23, 2011
Mi Kencito. Cuando un amigo se va...
Queda un espacio vacio
Que no lo puede llenar
La llegada de Otro amigo..