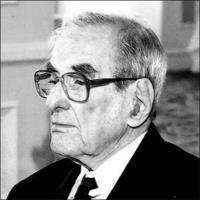 BORN
1925
DIED
2019
FUNERAL HOME
Rivet Funeral Home & Crematorium Inc. - Merrimack
425 Daniel Webster Highway
Merrimack, NH
FINKELSTEIN, Lawrence S. Professor of Political Science and participant to the founding of the United Nations, died on February 13 in Manchester, NH. He was 93. Dr. Finkelstein earned his undergraduate and graduate degrees from Columbia University. His career in international affairs began in 1944, when interning in the State Department's Office of Political Affairs; there he was selected to accompany the US Delegation to the San Francisco Conference on the UN Charter. Serving in the UN Secretariat from 1946-49, Finkelstein was privy to the disagreements and negotiations among global leaders that threatened, but ultimately resulted in the signing of the UN Charter. His insights on this critical time were documented in a 1990 interview for the UN Digital Library. At the Carnegie Endowment for International Peace, Dr. Finkelstein served as Director of Studies and Vice President from 1952 - 65. Following, he served in the US Department of Defense for one year. Dr. Finkelstein entered academia in 1966, as Director of the Case Institute of Technology-Western Reserve University study, piloting the strategic plan to unite the two universities as Case Western Reserve University; then as acting Dean of the Graduate School at Brandeis University, 1967-69; and Secretary of the Center for International Affairs, Harvard University, 1969-73. A natural teacher, Dr. Finkelstein enjoyed a successful academic career as Professor of Political Science at Northern Illinois University, 1973-95. His commitment to mentoring emerging professionals to produce excellent work and written communication, is recognized with the Lawrence S. Finkelstein Prize, awarded by the International Studies Association to a superlative graduate student to present a paper at its annual meeting. Dr. Finkelstein is author of numerous articles on foreign policy. In retirement in Hollis, NH in 1998, he put political theory to a practical test, running for the state House of Representatives. A Democrat campaigning in the then solidly Republican NH, he lost respectably; but his campaign contributed to the growth of the Democratic party in NH. Lawrence Finkelstein is remembered by his colleague Professor Joseph Nye, "as a voice for reasoned internationalism and multilateralism in American foreign policy." In his private life he was known for his kindness and humor, and a lifelong love of trout fishing, bird watching, and his birthplace of New York City. He was fortunate to have two happy marriages: first to Marina Salvin (deceased, 1972); then to Non Talland. A dedicated public servant and loving husband, father and grandfather, he is survived by his widow, Non, of Nashua, NH; his brother, Richard S. Finkelstein, PhD of Columbia, MO, as well as his children and grandchildren; his daughter Susan Zinn, and granddaughter Rachel Zinn, of San Antonio, TX; his stepdaughters Claudia and Valentine Talland, of Carlisle and Cambridge, MA; and his stepgranddaughters, Amelia and Natalie Barnett, and Tara Talland. A Celebration of Life will be held privately at a later date. The Rivet Funeral Home in MERRIMACK, NH is in charge of the arrangements. Rivet Funeral Home 603-424-5530

Published by Boston Globe from Feb. 25 to Mar. 3, 2019.
To plant trees in memory, please visit the Sympathy Store.
MEMORIAL EVENTS
To offer your sympathy during this difficult time, you can now have memorial trees planted in a National Forest in memory of your loved one.
Funeral services provided by:
Rivet Funeral Home & Crematorium Inc. - Merrimack
MAKE A DONATION
MEMORIES & CONDOLENCES
4 Entries
I was one of his students at Northern Illinois University and he supervised my dissertation on the "Idea of Federalism in Western europe after World War II, which was my effort to combine my interests on political thought with international relations.He was a lovely man, even though we did not agree politically. My best wishes to his wife and family.
David Herron
Student
May 23, 2019
My condolences to the family for the loss of your dear loved one. May you be strengthened with all power, so that you may fully endure with patience and joy.
March 4, 2019
Offering our deepest condolences during this time.
The Staff of George R. Rivet Funeral Home
March 3, 2019
Thank You for your service Lawrence
May you Rest In Peace
February 26, 2019
Showing 1 - 4 of 4 results