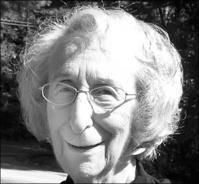 FUNERAL HOME
Campbell Funeral Home - Beverly
525 Cabot Street
Beverly, MA
BOLING, Lenore A. MD Formerly of Boxford and Brookline, passed away on October 22, 2016 at age 96. The only child of Isaac and Bessie (Schwartz) Altschule, Lenore was born and raised in New York City. She received a BA from Barnard College at age 19, and an MA in French Literature from Columbia University. She was completing a year of study in France when the outbreak of World War II forced her early return to the U.S. She served as an assistant dispatcher for American Export Airlines to help supply the war effort, incidentally learning to fly a Piper Cub airplane. Because of her experiences during the war, she decided to change her career path and become a physician, earning an MD from UC San Francisco at a time when few women became doctors. Lenore met Eldon A. Boling, MD while they were both in medical school, where they were drawn together by their shared love of music; Lenore was a gifted pianist, and Eldon had a fine tenor voice. They married in 1948, and raised six children, with whom they shared their deep appreciation for the arts and sciences, strong belief in the importance of education, and spirit of adventure. Lenore worked in many capacities at Harvard Medical School affiliated hospitals, where she practiced and taught Psychiatry, headed clinical services and programs, conducted research, and wrote or collaborated on many publications over the course of 65 years. As a psychiatrist and administrator at Massachusetts Mental Health Center in Boston and McLean Hospital in Belmont MA, she played important roles in supporting the missions of these institutions. She leaves a remarkable legacy of students and patients who benefited from her teaching and therapeutic practice. She believed in providing personalized and connected patient care, and offered insights on how to imbue medical practice with that spirit. She is remembered with love and respect by her extended family, including her six children, Peter, Alice, Lucy, Sarah, Deborah and Eli, their spouses and partners, and her eight grandchildren. Her beloved husband Eldon predeceased her in 2005. A funeral service will be held privately. Contributions may be made in Lenore's memory to Doctors Without Borders, via doctorswithoutborders.org. Information and condolences: www.campbellfuneral.com. Campbell Funeral Home Beverly, MA

View the online memorial for Lenore A. MD BOLING

Published by Boston Globe from Oct. 27 to Oct. 28, 2016.
To plant trees in memory, please visit the Sympathy Store.
MEMORIAL EVENTS
To offer your sympathy during this difficult time, you can now have memorial trees planted in a National Forest in memory of your loved one.
Funeral services provided by:
Campbell Funeral Home - Beverly
MAKE A DONATION
MEMORIES & CONDOLENCES
1 Entry
Interesting how, only years after you understand how truly blessed you were to have known such a person, do you fully appreciate the gifts that person gave you.
Bayard
Neighbor
November 23, 2020
Showing 1 - 1 of 1 results