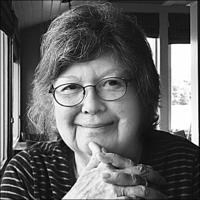 BORN
1933
DIED
2020
PORTER, Lynn (Rogers) Artist and Friend Lynn Porter passed away peacefully on October 7, she was 87. Her life was filled with family, friends, art, creativity, travel, dogs, and her husband, Bill.  Lynn was born in Middletown, NY on March 4th, 1933 and grew up in Trumbull, CT. She graduated from Dana Hall in 1951 and then Skidmore College in NY, the first college graduate in her family. At Skidmore, she studied jewelry under Earl Pardon, who was a lasting creative influence throughout her life. Goldsmithing was her passion, and she never stopped learning, taking classes and experimenting with new techniques, rarely agreeing to make the same thing more than once. Lynn was most inspired when creating for another person, and so produced many beautiful, symbolic pieces which artfully celebrated and enhanced the lives of those she knew and loved. Lynn was generous with her enthusiasm and talent. She was one of the founders of The Umbrella Arts Center in Concord; started the Grasshopper, a children's dress shop in Cambridge; taught metalsmithing at the Carroll School in Lincoln, MA, and volunteered in a wide range of programs for all ages. Music held a special place in her life. She met her husband, Bill, while singing in college. Enjoying concerts, including those of family and friends of all ages, playing the recorder, learning to play the cello, and listening to Bill play the piano were all integral to her enjoyment of life. In their 65 years of marriage, Lynn and Bill lived in many cities, most notably Cambridge and Concord, traveled the world, raised three daughters, and shared their lives with a succession of nine dogs. At MIT, where Bill was on the faculty and served as Dean of the School of Architecture and Planning and where they later served as Heads of House at Burton Connor, Lynn hosted events and shared house, dogs, a thoughtful ear, and advice. Her ability to listen to and make individuals feel special thrived while she worked with students. They spent many summers on Squam Lake in New Hampshire, where Lynn enjoyed spending time with friends and family, and working in her studio, which Bill designed. Lynn and Bill traveled extensively throughout the Muslim world while Bill was a member of the Steering Committee of the Aga Khan Award for Architecture, visiting Iran, Morocco, Yemen, Egypt, India, Pakistan, Turkey, and China in the 70's and 80's. Lynn loved to learn about other ways of life, photograph everyday things like drain pipes and hinges, shops and houses, and to help her children and others learn about the history, folklore, and art of cultures from around the world. Lynn developed dementia in her late 70's and, despite the effects of this condition, her creativity and passion for art never left her; nor did her love for Bill and warmth for all. She found new expression in charcoal drawing, and shared her work at a variety of exhibitions, including a show at the assisted living center, Cadbury Commons, where she moved in 2016. Through her words and works Lynn exhibited her curiosity and appreciation - of people, of objects, of beauty - both natural and humanly crafted. Lynn is survived by Bill; by their three children, Quayny Porter-Brown (Wyatt) of Concord, NH, Zoë Anderson (Dan) of Cambridge, MA, and Eve Porter-Zuckerman (Duncan) of Sandwich, NH; and by seven grandchildren, Keela Mar, Mason, Zeyla, Taplin, Io, Thomas, and Ursula. She is also survived by many nieces and nephews, friends, and their dog, Lyra. All services were private.

Published by Boston Globe from Nov. 24 to Nov. 29, 2020.
To plant trees in memory, please visit the Sympathy Store.
MEMORIAL EVENTS
To offer your sympathy during this difficult time, you can now have memorial trees planted in a National Forest in memory of your loved one.
MAKE A DONATION
MEMORIES & CONDOLENCES
0 Entries
Be the first to post a memory or condolences.