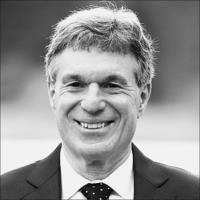 BORN
1954
DIED
2021
THOMAS, Mark T. Business Leader and Devoted Father and Husband Mark Trevillyan Thomas passed away unexpectedly on June 21, 2021, in Maine, while swimming with his wife Lynn near their summer cottage. Mark's warmth, intellect, and humor combined to light up every room he entered and to draw others to him. Wherever he went, he became the center. While he has left us far too soon, he lived a full and adventurous life, abundantly loving his family and friends and leaving a reverberating impact on the business world. Mark was born on July 28, 1954, in New York City, to David and Ann (Davis) Thomas. He grew up in Palisades, NY, Milan, Italy, and Sydney, Australia, with his two younger sisters and brother, who were not only siblings but also, along with their spouses, lifelong friends. Throughout his school years, Mark excelled academically, graduating from Sydney Church of England Grammar School (Shore), receiving a B.S. First Class Honours in Chemical Engineering from Queen's University in Kingston, Ontario, Canada and then an MBA from Harvard University with high distinction as a Baker Scholar. At each academic institution, Mark was a leader and highly respected among his peers. Similarly, Mark had a profound impact on the business world, founding, developing, and leading two successful international businesses: Monitor Group, a premier global strategy services consultancy and Monitor Clipper Partners, a transatlantic private equity firm. Mark was one of three people responsible for Monitor Group's overall strategic and operational development and created many of the most enduring business concepts. He also led many of Monitor's largest and longest running relationships, partnering with CEOs and corporate boards of his clients. Most recently, Mark was the Executive Chairman of Agero, the leading provider of software-enabled driver safety services and technology. Mark served as an independent director on several corporate boards such as Cimpress and Robertson Ceco Corporation, as well as volunteer boards including Fenn school, Massachusetts General Hospital and FC Boston Bolts. Mark achieved tremendous personal success in business, but he always led with humility, serving as a mentor and coach to countless junior colleagues. He will be remembered as a problem solver, a strategic and visionary thinker, and a consummate team player. While Mark's work accomplishments were substantial, he also excelled as a father and was utterly devoted to his three children: Matthew, Gabrielle (Breezy), and Christopher. Mark took immense joy and pride in watching them grow and develop into the outstanding people they are today. He was their rock. He loved spending time with them and their friends, cheering them on in their various pursuits, and imparting his values to them. For Matthew, teaching him how to be the light in so many peoples' lives through his magnetic personality and spirit, and instilling values of kindness and fairness that are essential to any leader. For Breezy, who has become a total encapsulation of Mark's personality and work ethic: he was her role model from the early days of youth soccer, where he would appear for every game and transferred to her his competitive drive, to an accomplished academic and budding business career of her own, she continues to emulate him and make him proud every day. For Christopher, his dad encouraged boundless imagination, wisdom and humor; a shared love of cinema, history and storytelling, and a steadfast support of a career in the arts. Mark traveled extensively throughout his life for both business and pleasure. The son of two British parents who loved culture and travel, he was exposed to other mores from an early age. The one constant throughout Mark's life was time spent with family and friends during the summer months at his cottage on Sand Pond in Denmark, ME. It is of some comfort that Mark died in his most favorite place and in the arms of the woman he loved. The last five years have been among Mark's happiest as he shared his life with his wife Lynn, with whom he reconnected in 2016 after a nearly 40-year gap from their days as university sweethearts at Queen's. Mark and Lynn packed a life's worth of adventures and love into the last five years. They were inseparable – traveling together in Europe, skiing dozens of days a year in Vermont and Colorado, biking, hiking, swimming, rowing, dancing under the stars, spending hours in art museums, or simply relaxing in front of a good movie. They cherished time spent with a large cadre of family and friends as they wove their two worlds together. Quite simply Lynn would say that he filled her life with love, fun and joy every day. Mark was predeceased by his parents. In addition to Lynn and his three children, Matthew Thomas (Los Angeles, CA), Gabrielle (Breezy) Thomas (New York City), and Christopher Thomas (Brooklyn, NY), Mark is survived by his two stepdaughters, Chelsea Carss (and Nicholas Shalagan) of Toronto, Ontario, and Caitlin Carss (and Daniel Malone) of Aurora, Ontario, his step-granddaughter Sophie Malone, his three siblings Charlotte (and Ty) Lanahan of North Pomfret, VT, Miranda (and Charles) Shackleton of Bridgewater, VT, Toby Thomas (and Tristyn Patrick) of Shaker Heights, OH, the mother of his children Kelan Barry Thomas, and his nieces and nephews: Sophie Shackleton, Hugh Shackleton, Nat Thomas, Graeme Thomas, Cecilia McCollum, Madeline McCollum, Alison McCollum, and Theodore Barry. A Memorial Service and Celebration of Mark's extraordinary Life will be held on August 6th in Boston. For further details, please contact Bill Young at [email protected] To honor Mark's memory, the Mark Thomas Memorial Fund has been established by the Boston Bridges Initiative, a cause which Mark and Lynn have been dedicated to, which supports school staff and administrators' efforts to create a more inclusive and safe environment for cross-racial relationships to form outside of the classroom. Donations in his memory can be sent to The Boston Bridges Initiative, Inc., P.O. Box 293, Weston, MA 02493.

Published by Boston Globe from Jun. 29 to Jun. 30, 2021.
To plant trees in memory, please visit the Sympathy Store.
MEMORIAL EVENTS
Aug
6
Memorial service
Boston, MA
Aug
6
Celebration of Life
Boston, MA
MAKE A DONATION
MEMORIES & CONDOLENCES
7 Entries
My condolences to Lynn and all of Mark´s family and friends. May the way in which he lived his life with so much love Abd care be a constant comfort and inspiration to you.
Hazel Pompey
August 6, 2021
Had lots of fun with `Dingo´ at Queens. His passing came as a complete shock to me. It was definitely too soon for Mark. Please express my heartfelt condolences to his family.
Gordon Hall
Friend
August 6, 2021
We are so sad to hear about Mark, I enjoyed talking to him , cutting his hair, he was an inspiring man, we talked about our children , business, I heard the news from his good friend Bill, makes me think about life , God Bless Mark rest in peace , I will lite a candle in church for him today. Love Robert and Elizabeth Berberian
Robert Berberian
July 25, 2021
I was saddened to learn of Mark's passing. My memories of Mark started in Section H at HBS- where he was a dear friend. We shared so many fun, meaningful, and happy memories. From jogging together, to Business Policy II capstone project, to dancing, to drinking great wines and sharing wonderful family stories- to warm hugs and great catch up conversations at Reunions. My warmest regards to Mark's family- I am so sorry for your loss. Mark always called me by the nickname only he used- so I will sign off With Love, Dear Mark Charps ( pronounced "Sharps")
Carol McMullen
School
July 13, 2021
So so sorry for your lost Lynn. Hopefully time will heal your pain and good souvenirs will make you go on. Regards.
Sylvie Labonté
Friend
July 1, 2021
I always enjoyed Mark when he and I crossed paths, but I had no idea of the breath of his life! Like many truly accomplished people he was also filled with humility; he had nothing left to prove. I'm so sorry for his early departure and that he will leave such a void for you all, dear Thomases
Josh Metcalf
Friend
July 1, 2021
Dearest Toby, Greg and I are so sorry for your tremendous loss. We are holding you and your family in our hearts as you navigate this incredibly difficult time. Sending much love
Charis Leos
Friend
June 30, 2021
Showing 1 - 7 of 7 results