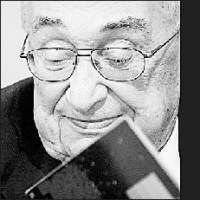 FUNERAL HOME
Brezniak Funeral Directors
1251 Washington Street
West Newton, MA
SEIFER, Matthew Of Hull, MA, celebrated 103 years of life April 5,1908 - January 5, 2012. Beloved husband of Lillian (Wood) Seifer, and the late Augusta (Fagin) Seifer. Devoted father of Joseph and his wife Ramona, Sandra Bonilla, and the late Richard Seifer and his surviving spouse, Beverly. Dear grandfather of Amy Prychal, Michael Seifer, David Naterman, Randi Butter, Paul Seifer, Tammi Kiker, Jodi Dunlop, and Samantha and Richard Seifer. Matthew is also survived by many loving great-grandchildren and loving great-great-grandchildren. Loving brother of Joel and his wife Blanche, and the late Jack, and Charlotte (Arkie). Referred to by his many colleagues as a living legend, Matthew Seifer worked 33 years for the Federal Bureau of Narcotics/DrugEnforcement Agency. In 2006, he was awarded the Lifetime Achievement Award from the New England Narcotic Enforcement Officers Association. Matthew graduated from the Massachusetts College of Pharmacy with a Pharmaceutical Chemist degree in 1930. He was married to Augusta "Gussie" Fagin for 47 years until her death. He proudly served his country in World War ll even though he was 36 years old and had 3 children and could have been deferred. He served in the Navy as a Pharmacist Mate. He lived at home in Hull, MA, with his wife of 24 years, Lillian (Wood) Seifer, until one month ago when his health deteriorated. Matthew Seifer spent his life serving the law enforcement community and his country, and giving his love and wisdom unconditionally to his fortunate family and friends. We celebrate his life and all the blessings he had during his 103 years. Services at Brezniak-Rodman Chapel, 1251 Washington St., (Corner of Chestnut St.) W. NEWTON on Tuesday January 10, 2012 at 1:00 pm. In lieu of flowers, remembrances may be made to Temple Beth Shalom, 600 Nantasket Ave., Hull, MA 02045.
Brezniak-Rodman www.brezniakrodman.com

Published by Boston Globe from Jan. 7 to Jan. 8, 2012.
To plant trees in memory, please visit our Sympathy Store.
MEMORIAL EVENTS
To offer your sympathy during this difficult time, you can now have memorial trees planted in a National Forest in memory of your loved one.
Funeral services provided by:
Brezniak Funeral Directors
MAKE A DONATION
MEMORIES & CONDOLENCES
7 Entries
John Lemanski
January 23, 2012
What an honor to have you as a friend all these years. How much I learned from you.....about everything possible. Who can I learn from now ? You were a gift to everyone. Your loving family, your wonderful wife, and all of your friends. I know you are at peace now but too soon for all of us.

Love Phyl
Phyllis LeBlanc
January 10, 2012
To Matt's Children & their families and his brother Joel & Blanche and their family - My condolences go out to all of you. Matt was a wonderful man who I am glad I got to meet. He was very interesting to talk to and always had a story to tell. He will be truly missed.

Sheryl Scanlon (fiance of the late John DeTullio, Matt's stepson)
Sheryl Scanlon
January 10, 2012
Growing up it was apparent that "Uncle Matty" practiced his family's values. To name a few: Matty was kind ("Hi dear"), optimistic, accomplished, respected, loyal and always shared his chuckle and great sense of humor. Another memory was how much he enjoyed making such strong horse radish that everybody knew well before that he was about to come in the door. Although he left many wonderful memories for his family, he will be greatly missed.
Roz Chefitz
January 9, 2012
Sorry for your familys lost.
Paul willis
January 9, 2012
As our family patriarch Matty taught many life lessons:
I am the sun that always rises
I am the strength of an entire family
I am the one who saves everything
I am the wisdom the world needs
I am the man I wish I could be when I was a boy
I am the concerned, the respected, and the admired.
But, most of all I am Matty Seifer, PAPA to some, Pupper to others,
and Uncle to the rest. (written by Richard Seifer)
Ronda Seifer
January 8, 2012
An extraordinary man who was so intelligent and knowledgable. Jimmy and I loved to be around him on the Cape when he would share his amazing stories. Blessings to Matt's entire family. He was a legend.
Gail and Vincent Porciello
January 8, 2012
Showing 1 - 7 of 7 results