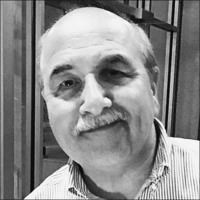 FUNERAL HOME
Charles F. Oteri and Son - Franklin Funeral Home
33 Cottage St
Franklin, MA
FILOSA, Paul A. Passed away at home on September 15, 2021 at the age of 70 after a long battle with cancer. Paul's favorite thing in life was being a Nonno. He also enjoyed meeting his Franklin friends for coffee in the mornings, spending time at the fishing club, his annual fishing trips, and attending rabbit dinners. Paul was extremely proud of his Italian heritage, was a self-proclaimed Italian wine connoisseur, and visited the old country many times with his family. Paul was an Air Measurements Scientist for 40 years before he retired in 2017. His career took him to many places across the country and overseas, including the Middle East, and led to many lifelong friendships. Paul was also a very proud veteran of the U.S. Air Force. Paul leaves his wife of 50 years Sharon (Visco); his daughters Julie and Gina; his son-in-laws Kurt Kabel and Andrew Wilcox; and his grandchildren Luca, Maya, Cora, and Nico. Brothers Richard and his wife Carol, Robert and his wife Joan; twin sister Patricia; sister Donna; sister-in-law Karen DiNardo; and many nieces and nephews. He was born and raised in Newton, MA son of Alfred and Stella (Leeber) Filosa. Relatives and friends are invited to attend his Calling Hours Tues., Sept. 21st in the Charles F. Oteri and Son Franklin Funeral Home, 33 Cottage St., from 1-3PM. His Interment will be held privately. In lieu of flowers, donations in Paul's name may be made to Dana-Farber Cancer Institute to support cancer research and patient care at Dana-Farber Cancer Institute, P.O. Box 849168, Boston, MA 02284 or at www.dana-farber.org/gift. Guestbook, www.oterifuneralhome.com

View the online memorial for Paul A. FILOSA