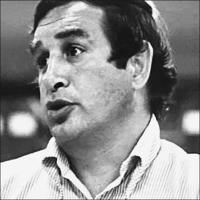 SCHORK, R. Joseph Emeritus Professor of Classics Professor Rudolph J. "Joe" Schork has died at the age of 88. Born in Baltimore, Maryland, and raised in Elyria, Ohio, Professor Schork graduated summa cum laude from the College of the Holy Cross in 1955, with a major in Greek and Roman classics. Upon graduation, he took up a Fulbright Scholarship to Oxford University, where he was awarded a D.Phil. degree in 1957, as a member of Exeter College and under the direction of Professors C.A. Trypanis and Paul Maas. His academic career began at John Carroll University in Cleveland, Ohio, and encompassed tenured appointments at Georgetown University, the University of Minnesota, and the University of Massachusetts Boston (where he was brought in as full professor and department chair and served from 1975 to his retirement in 1995). He was an exciting and imaginative teacher, with students regularly applauding his dynamism and likening him to their most inspirational sports coaches. He rounded out his professional portfolio with a genuine and generous dedication to service to his serial academic institutions, regularly entrusted by his departments, deans, and upper administrators with a plethora of critical roles in academic shared governance. Although his dissertation (and first book) centered on the Byzantine author, Romanos the Melodist, he was at heart a classical generalist, teaching and publishing scholarship in the areas of both Greek and Latin language and literature. An interest in the classical tradition in modern literature further engendered studies of post-classical authors as varied as Shakespeare, Milton, Thomas Mann, Stendhal, and Oscar Wilde. A late-career fascination for tracing the cleverly-encoded classical allusions in the complex works of James Joyce inspired him to write numerous articles, make many international conference presentations, and author three books on Joyce. In all, Professor Schork published over 70 articles and 4 books. Professor Schork is survived by his beloved daughter and granddaughter, Boston artist Heidi Schork and Sophia Clarke of Washington, DC; by his ex-wife, Jeanne Delay Schork; by his long-time partner, Betsy Boehne; by his sister, Carol Mitola; and by a number of nieces and nephews. He was predeceased by another sister and brother, Ann Doherty and Tony Schork. Memorial donations may be made to St. Ignatius Loyola Academy, 1911 W. 30th St., Cleveland, OH 44113 or online at https://www.ignatius.edu/give/give_now?ext=, in support of educational excellence and learning, or to an educational institution of the donor's choice.

Published by Boston Globe from Oct. 1 to Oct. 3, 2021.
To plant trees in memory, please visit the Sympathy Store.
MEMORIAL EVENTS
To offer your sympathy during this difficult time, you can now have memorial trees planted in a National Forest in memory of your loved one.
MAKE A DONATION
MEMORIES & CONDOLENCES
6 Entries
I learned today of Joe´s passing. I had the distinct pleasure of having Professor Schork teach me Ancient Greek among other things in the late 1980s/early 1990s. Not only a fantastic teacher, he was a mentor. He took me to get my first beer when I turned 21. I was lucky to know him. The person I am is a direct result of the force Joe was. My deepest sympathy to his family and my condolences.
Mark Roberts
School
October 28, 2021
I knew Joe as Pats - the ever devoted father and grandfather to Heidi and Sophia. Sophia and her pal, my son, could write a book of Life with Pats.
Kathleen McKenna
October 10, 2021
Joe was a brilliant Joycean colleague, but always a fellow Cleveland homeboy. Requiescat in pace.
Robert Janusko
October 9, 2021
My heartfelt sympathies on the passing of a wonderful man. My first course in the Classics Department at UMass, Boston was with Professor Schork (Paganism and Christianity). That was it; I was hooked and all in. He was an exciting and entertaining instructor, vehemently opposed to high falutin pretense, and had an ability to make all manner of seemly incidental sidebars relevant to the Classics. He will be missed.
Lynne LeBlanc
October 9, 2021
I too was lucky enough to be a student in the University of Massachusetts, Boston campus, Classics department in the early 80´s. I remember Professor Schork not only from my four years there, but also as a friend for many many years afterwards. I also became lifelong friends with his amazing daughter, Heidi. As a professor, RJ was captivating, dynamic, inspiring, funny, effectual, and generous with his time. I am very grateful today to have studied with a professor of his caliber; indeed, the entire Classics department was no less impressive. Professor Schork taught me the Classics, motivated me, believed in me, wrote me letters of recommendation, and even helped me find a job. It´s been well over thirty years, but I can still quote verbatim things he said in his courses on The Greeks, The Romans, Paganism and Cristianity; Greek Tragedy, Latin 1 and 2, etc. I took some evening classes, so I found out by accident tha RJ was a true renaissance man when a classmate drove him to the nearest T stop because he didn´t drive a car himself! I brought friends and family to his classes and museum visits, and they too remember how dynamic and captivating he was even though they only met him a few times. Heaven, imho, just welcomed one hell of a Classics professor.
Ben Banks
School
October 6, 2021
It was an honor to have studied Classics under Professor Schork at UMass Boston in the early 1980s. One of his best courses was "From Paganism to Christianity." Professor unique manner of presenting course materials brought ancient history and culture to life in the classroom. Along with Professor Emily McDermott and a few other teachers in the Classics Department, Professor Schork inspired many, many students to develop an appreciation for a liberal arts education, and, subsequently, to find their own true calling in life. God rest Professor Schork. We have lost a wonderful teacher.
Fr. John Mahoney, Lincoln, New Hampshire
School
October 4, 2021
Showing 1 - 6 of 6 results